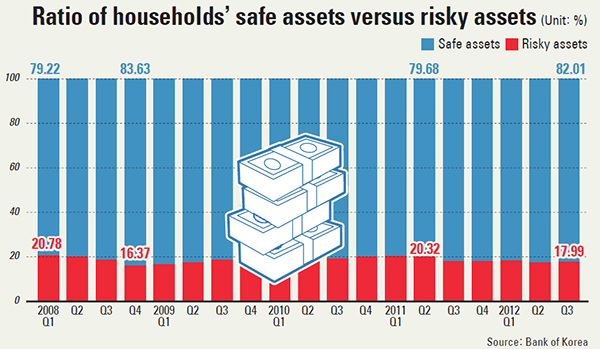 There is no exception in Korea to the tendency to favor low-risk investments during rocky economic times, according to statistics released by the Bank of Korea yesterday.

The remaining 17.99 percent, or 437.6 trillion won, was put in riskier investments, including equities and derivative financial products, over the same period.

The ratio of safe investments to local households’ combined assets still stayed around the 80 percent mark, which it has done now for five straight quarters.

Market observers said the Q3 figure resembles the Q4 data from the 2008 financial crisis, when the ratio of households’ safe assets rose to 83.63 percent.

Experts said Korean households sticking with low-risk investments is far different from the trend witnessed in global financial markets, where some low-risk assets are gradually moving to risk-weighted assets with the expansion of global liquidity.

While market observers anticipated a recovery in investor sentiment in the local financial market given that the Kospi broke the 2,000 mark for the first time in three months last Thursday despite North Korea’s surprise rocket launch on Wednesday, they said it will take some time for Korean households to switch to risk-prone assets. It will take a while for the expansion on liquidity to flow into households.