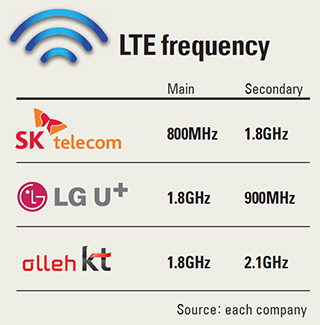 Telecommunication companies are scrambling to secure larger capacities on the long-term evolution (LTE) frequency as the number of subscribers is expected to surge with the official release of the iPhone 5 earlier this month.

The rapid increase in subscribers to the 4G networks could not only slow down Internet access and live stream services but also bring about a network blackout unless the frequency capacity is increased.

The telecommunication industry claims that the current capacity is insufficient to even get through the first half of next year.

Next year, the Korea Communication Commission (KCC) is planning to auction an additional 1.8 gigahertz of LTE frequency.

The nation’s leading telecommunication company SK Telecom and its rival KT are expected to aggressively compete in the auction, a year after the two were locked in a previous fierce bidding war for 1.8 gigahertz frequency.

SK Telecom won that bid after offering almost 1 trillion won ($932.5 million). It currently uses it as a secondary frequency, using 800 megahertz for its primary frequency.

Securing additional bandwidth is essential for telecommunication companies. There are roughly 14 million people subscribing to the LTE service since it became commercially available in July of last year.

SK says it expects its number of LTE users to increase to 7.4 or 7.5 million by the end of the year with the long-awaited arrival of iPhone 5.

When SK began offering the LTE service, on average 22,000 users signed up on a daily basis. But since the iPhone 5 has been released, 290,000 users have been subscribing to the 4G service.

Lee Bong-gyu, a professor at Yonsei University, said the explosion in LTE subscribers and data usage could bring about a large-scale blackout that could shut down the networks. 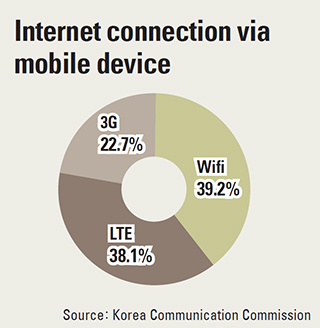 And SK says it expects to double its current figure in LTE subscribers by the end of next year, thanks to its multicarrier service - a traffic disperse system where the LTE network converts from one frequency to another when one is overloaded.

The company claims that the multicarrier system doubles the speed of its LTE service.

Last year, SK Telecom became the first telecommunication company in the world to succeed in commercializing the multicarrier service.

The company on the weekend announced that the subscribers to the service exceeded two million. This is more than what the company had expected to achieve by the end of the year.

The subscribers to the multicarrier service roughly account for 28 percent of the company’s seven million LTE subscribers.

The official launching of the iPhone 5 has helped boost the subscription to the multicarrier service, which is also available for the iPhone 4 and 4S as well as iPads and iPad Minis, Galaxy S3s, Galaxy Notes and other smartphones and tablets.

Although SK Telecom services LTE in most areas in Seoul, the multicarrier system is only available in 15 districts. SK plans on expanding this service to all 25 districts in Seoul as well as the five major cities - Busan, Incheon, Daejeon, Dageu and Gwangju - by the end of the year.

SK Telecom lost many of its subscribers when the iPhone made its debut in Korea in 2009, which was only available through KT. The iPhone was available at SK Telecom six months later after the iPhone 4 was released here.

“There’s a substantial number of SK Telecom customers who have crossed over to KT because of the iPhone,” Bae said. “However with the launch of the iPhone 5, we will bring back the customers we have lost.

“Our competition is busy setting up their LTE networks, but customers already know that SK Telecom’s LTE offers the best quality, and this will help customers return to SK Telecom.”

But some market insiders claim that there is a crucial flaw to the multicarrier service.

“At the current subscription of roughly seven million, it is not going to cause any problems,” a market insider requesting anonymity said.

“But the real problem happens when the number of subscribers surges as both frequencies will be severely jammed.

“The best way to solve this glitch is to expand frequency capacity.”

SK Telecom currently has the largest LTE frequency capacity of 110 megahertz. This is more than the 90 megahertz that KT has and 60 megahertz of LG U+.

Securing 1.8 gigahertz is essential especially since it is the most used frequency across the globe. According to a recent report by the Global Mobile Suppliers Association, as of November among the 112 telecommunication companies servicing LTE, 37 percent or 42 companies use 1.8 gigahertz.

Especially among the 560 mobile devices that accesses LTE networks, 130 support the 1.8 gigahertz frequency. Therefore, if a telecommunication company secures a larger capacity of 1.8 gigahertz, the users can access LTE services when traveling abroad.

According to industry watchers, SK Telecom is asking the KCC to distribute the additional frequency according to the size of subscribers, which is reportedly opposed by KT and LG U+.

Unlike the multicarrier system that switches frequencies, users have better access to the Internet through the automated redistribution of data capacity through its 144 cells set up in different districts.

If there is an overload of data in Gangnam, the unused data capacity from a nearby cell is automatically allocated to the southeastern district.