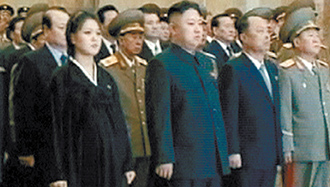 Ri Sol-ju, left, the wife of North Korean leader Kim Jong-un, second from left, is seen during the inaugural ceremony of the Kumsusan Palace of the Sun in Pyongyang appearing to be pregnant, as they attend the ceremony on the first anniversary of Kim Jong-il’s death, in this still image taken from video yesterday. [REUTERS/YONHAP]

North Korea yesterday convened the opening ceremony of the renovated Kumsusan Palace of the Sun, where the glass coffin of their late leader Kim Jong-il lies in state, commemorating the first anniversary of his death.

The new leader Kim Jong-un and his wife Ri Sol-ju attended the ceremony, accompanied by high-ranking party and military officials.

In front of the large-scale, newly-remodeled family mausoleum, where the founder’s body is also laid, the couple and other officials cut red tape.

They also paid their respects to the founder and his son in front of the two standing statues in the palace.

Ri, who made her first public appearance in 40 days, was clad in a black traditional hanbok dress, with a more pronounced belly, raising speculation that she could soon give birth.

On Oct. 29, Ri appeared in public to watch a performance of the Moranbong Band marking the 60th anniversary of the founding of Kim Il Sung Military University, wearing a beige winter coat left open slightly as if she had started showing.

The National Intelligence Service, the South’s spy agency, said at a parliamentary audit in October that the reason why Ri had not been appearing in public was because she was pregnant.

The NIS also said in July at a closed-door meeting with members of the National Assembly’s Intelligence Committee that “we assume that there’s already a child between Kim and Ri,” the committee’s members told reporters.

The Kumsusan Palace of the Sun was first built in 1977, called Kumsusan Assembly Hall.

It was renamed in 1995 to Kumsusan Memorial Palace, when the North marked the first anniversary of the death of founder Kim Il Sung.

The palace was renovated after the death of the second leader and renamed with its current title.

Pyongyang has spent $100 million to mummify former leader Kim Jong-il and exhibit his body in the Kumsusan Palace of the Sun in Pyongyang, a North Korea source based in Beijing said recently.

“Over the past year, Russian technicians were engaged in mummifying Kim Jong-il and they recently completed the process,” a North Korea source in Beijing told the JoongAng Ilbo. “North Korea imported all the materials needed to create a public facility where people will be able to pay respects to Kim and also build a very large commemoration park near Kumsusan Palace of the Sun in Pyongyang.”

Kim Jong-il’s remains have been at the memorial palace for the past year, along with the preserved remains of his father.

Juche Travel Services, a United Kingdom-based travel agency, recently said on its Web site that tourists will be able to visit the Kumsusan Palace of the Sun starting in February to see the bodies of Kim Il Sung and Kim Jong-il.

The agency was established in November 2011 and is endorsed by the North’s Korea International Travel Company, which is an officially recognized travel agent in North Korea.

“North Korea’s economy will be affected by this as it is investing $100 million [to preserve Kim Jong-il’s body] and building related facilities at a time when its economy is already in difficulty,” the source said. “Also, a large amount of money is needed to invest in maintaining the body every year.”

According to the source, Russian technicians will be in charge of maintaining the preserved corpse.