Five holiday performances to check out with the kids

Five holiday performances to check out with the kids 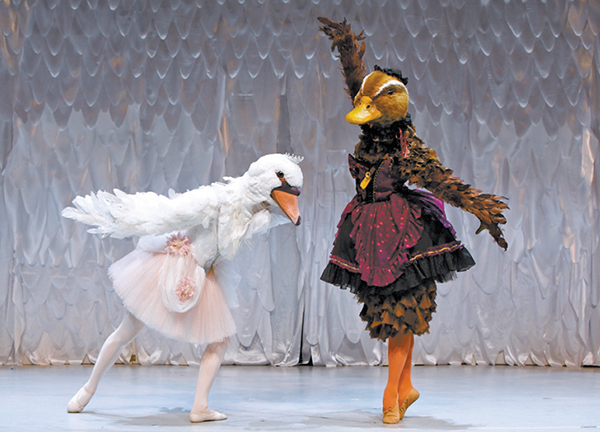 
If your children’s toy boxes are overflowing with robots and Barbie dolls, presenting them with some tickets to holiday performances may come as a refreshing surprise to make Christmas a little more memorable. (Disclaimer: The Korea JoongAng Daily is not responsible for children who burst into tears and ask for more robots).

A number of plays, musicals and ballets for children are being staged this winter in Seoul and other parts of the country that will allow children to appreciate music, theater and art “in their own language,” according to Best Play, one of the organizers. The following is a list of performances being held over the holidays.

Top: “Peter and the Wolf” is adapted into a musical with a slightly altered story line. Bottom: The musical “You are Special” is a moving story that will be enjoyed by both adults and children. Provided by the organizers

“Peter and the Wolf”

The famous children’s story “Peter and the Wolf” by Sergei Prokofiev of the Soviet Union comes to life on stage as a musical. The songs will be familiar to most elementary school students as they are included in fourth grade music textbooks. Unlike the original story, in which Peter goes hunting for the wolf, the Korean version attempts to “get rid of the prejudice” children can easily take away from the original version that “wolves are fierce animals and must be hunted.” Instead, the musical will portray Peter as a kind boy who helps the wolf trapped in a snare.

Despite the altered story line, children will be able to enjoy the original music as each character is represented by a corresponding instrument ranging from a violin for Peter, an oboe for the duck and a horn for the wolf. Tickets cost 25,000 won ($23).

The musical “Vincent van Gogh’s The Starry Night” is an “educational encyclopedia” for children, says the organizers. The musical tells the story of van Gogh, one of the world’s most beloved painters, in three acts. The musical features Beethoven masterpieces. Tickets range from 18,500 won to 25,000 won. 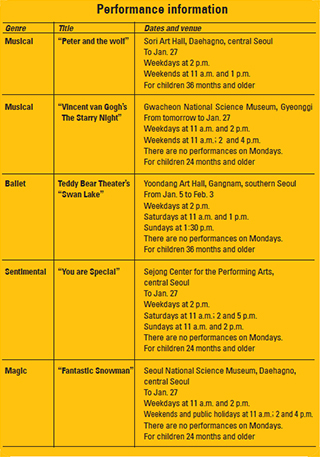 Ballet dancers aren’t the only ones who can perform pirouettes and plies. Teddy bears will be staging the classical ballet “Swan Lake.” The various animals in the show are not made out of those “cheep costumes you see at amusement parks,” according to the Seol & Company, the organizer. Instead, some 100 million won was spent on the production, a large portion of which went to costume design. The dancers inside animal costumes are professional dancers who have performed in the musical “Cats” throughout the year. Tickets range from 40,000 won to 50,000 won.

Also referred to as a “healing” musical, “You are Special” tells the story of a boy named Fun who slowly loses confidence in a society where people distinguish the “successful and smart” from the “not so successful and not so smart,” discriminating against the latter group. But when Fun, who thinks he is useless, meets Elly, who tells him he is special, he regains his courage. According to the organizer, Best Play, the musical differentiates itself from other children’s plays by “moving the parents more than the kids.” Tickets cost 25,000 won.

At the Seoul National Science Museum in Daehagno, central Seoul, a snow fairy Luna turns the stage into a winter wonderland. The “Fantastic Snowman,” according to the organizer, is produced to “help children learn fundamental principles of science in a fun way.” Tickets range from 10,000 won to 20,000 won.