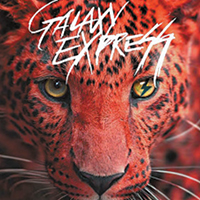 Korean rock group Galaxy Express knows how to make you ecstatic with loud drum beats, bass and guitar topped with shouts at top of their lungs.

The three-member band’s third album manages to keep you doing light head bangs but not to a point where you want to thrash in a mosh pit.

The band started in Hongdae, but has managed to extend its presence across the Pacific Ocean. It recently returned to Seoul from a tour around North America.

Possibly due to listening to one too many songs from the rock band Dick Punks using an electronic piano rather than an electric guitar, Galaxy Express’ electric guitar sounds too “electric.”

The album’s ninth track, “Always,” is softer to the ears and it is surprising to realize that the album’s vocals are from the same guy who screams with a cracked voice.

As a big fan of leopard prints, my favorite part of the new Galaxy Express album is the cover design.