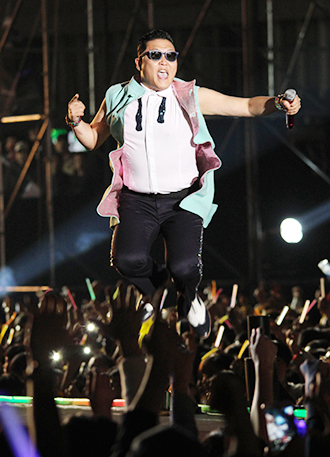 On Dec. 17, Billboard.com ranked Psy as the seventh Top New Artist for the year.
According to the U.S.-based music magazine and Web site, the Korean rapper was one spot above 2 Chainz and below Calvin Harris.
British boy band One Direction is on top of the chart while second and third places went to Carly Rae Jepsen and Gotye, respectively.

Meanwhile on the “Top Artists” chart, Psy rose to 56th place and was 51st on the “Hot 100 Artists” chart and 15th on Social 50 Artists, which tracks singers who utilize SNS Web sites.

Throughout the year, the Web site had its fair share of Psy coverage, resulting from the success of “Gangnam Style” and its race against Maroon Five’s “One More Night.”