Faced with signs of aging, many elect a cosmetic fix

Faced with signs of aging, many elect a cosmetic fix 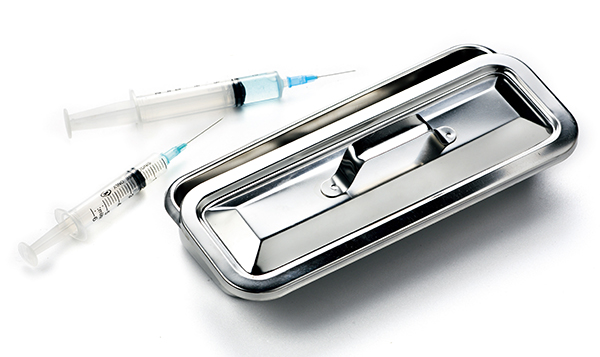 A 56-year-old Seoul mother of four, Shin had always been proud of her youthful appearance. People who didn’t know her well assumed she was in her early 40s. Whenever she went outside with her youngest daughter, strangers in supermarkets, hair salons and department stores were shocked to learn her 20-year-old companion was her fourth daughter and her oldest was 32.

But when Shin hit 55, she looked in the mirror and didn’t like what she saw: “horrible bags under the eyes.”

“I have such a great skin with hardly any age lines on my face, but it was just the bags and dark circles under my eyes that made me look so old,” she says. “It made me look older than 50.”

What really worried Shin was the tear trough, a deep line that starts between the corners of your eyes and nose that travels down under the lower eyelids right above both the cheeks. Cosmetics experts say it is one of the first signs of aging.

To make herself look younger, Shin decided to go through a plastic surgery that involved incising skin under both her eyes and pulling it up to reduce the wrinkles.

“It was so painful I don’t know if I could go through that again, but I’m satisfied with the result,” she says. “You can’t tell I’m over 50, right?”

Shin is not alone. There has been a steady increase in people in their late 40s to 60s who try to shave years off their appearance. In the plastic surgery capital of the world, that should come as no surprise: According to the International Society of Aesthetic Plastic Surgery, Korea led the world in 2010 with 16 procedures per 1,000 people, well ahead of runner-up Greece with 14 per 1,000.

Winter is the high season for those seeking to cut years off their appearance. The cold weather helps swelling go down faster, and it’s perfectly natural to wear coats with high collars, scarves, masks or hats that cover parts of the face.

Although there are no precise statistics on cosmetic surgeries and procedures on patients in their late 40s and 50s, many clinics in southern Seoul, the city’s mecca for plastic surgery, say there has been an increase in older patients in recent years.

“It’s called ‘rejuvenation surgeries,’?” says Park Won-jin, of the Wonjin Aesthetic Surgery Clinic in Seocho-dong, southern Seoul. “Three out of 10 patients are aged over 50 and this trend has been steadily increasing over the past few years.”

Kwak Geum-ju, a professor of psychology at Seoul National University, attributes the rise to longer life spans and a Korean “social atmosphere [that nurtures the notion] that most people can live to 100.”

“Unlike in the past, many people in their 60s think there are many more years ahead of them,” says Kwak. “They become more active in managing their appearance and trying to look young. In the past, those who decided to undergo cosmetic surgeries or procedures were considered ‘overboard,’ but today there is more positive feedback with people saying they look younger, healthier and better.”

As average life expectancy increases in the country, so-called ajumma (middle-aged women) are especially eager to regain their “beautiful youth.” For many, being in their 40s or 50s is no longer a time to sacrifice for their families or children. They don’t hesitate to open their wallets to get rid of age-revealing facial lines or even to enlarge their breasts. 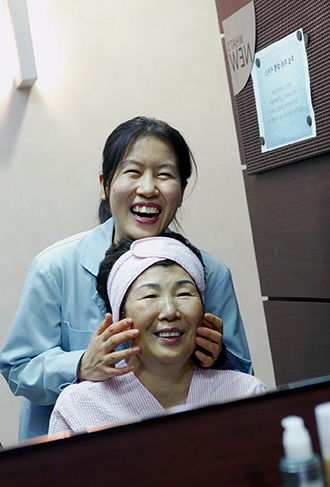 However, cosmetic surgery is not just for women anymore.

“Having a spotless appearance is also a competitive goal for middle-aged men,” says Park, of Wonjin Aesthetic Surgery Clinic. “Many politicians visit the clinic prior to election time or before making a public appearance on television for minor procedures.”

Jung Young-choon, chief director of Hershe Plastic Surgery in Cheongdam-dong, southern Seoul, adds that “60 to 70 percent of older men who undergo plastic surgery are CEOs or other business executives.”

“As increasing numbers of middle-aged men get into situations where they mingle with younger men at work or parties, they don’t want to be treated as ‘old grumps,’?” says Jung. “They have no aversion to plastic surgery.”

According to Jung, there are various kinds of facial techniques under rejuvenation surgeries and procedures, ranging from simple Botox injections to face-lifts.

One of the most popular methods to shed a few years is Botox, considered the gold standard of rejuvenation procedures.

“It’s so common and popular, I don’t think it is even considered a medical procedure. Some people even have it done during their lunch break,” says Jung. “It is the industry’s fastest-growing cosmetic procedure.”

First approved by the U.S. Food and Drug Administration in 1990 for treating eye muscle spasms, it showed its cosmetic potential immediately when patients noticed their wrinkles softening. For all its cosmetic value, Botox is a highly toxic substance that can be life-threatening. Botox blocks nerve impulses to temporarily paralyze muscles and is now widely used to smooth crow’s feet around the eyes, wrinkle lines on the forehead and frown lines between the eyebrows.

If used too much, however, it can be painfully obvious, as seen in several actresses who have fallen victim to unmovable forehead jokes. And a simple 10-minute Botox procedure doesn’t come cheap. It costs 200,000 won ($186) to 1 million won per treated area for results that last three to six months.

Another common procedure often used in tandem with Botox is hyaluronic acid-based injectable fillers, which are used to treat deep smile lines, plump up cheeks or fill in deep lines that form around the mouth known as the nasolabial folds, “the parentheses” or “marionette lines.” Fillers also are used to restore facial symmetry. The cost varies depending on which filler and how many syringes are used, but the 15- to 30-minute treatment is more expensive than Botox and also lasts three to six months.

Kim Soo-shin, director of the Real Cosmetic Clinic in Sinsa-dong, southern Seoul, says it is important to consult a

physician before opting for plastic surgery.

“All cosmetic surgeries and even minor procedures like Botox and fillers must be done by a professional after consulting with a professional as there can be many side effects, depending on the individual. For example, those with diabetes are more likely to develop infections from receiving Botox,” says Kim. “It is more important for elderly people to talk to their physicians first as they are more prone to side effects.”

Kang Min-ji, a member of the “Anti-plastic surgery” Internet cafe recently uploaded a post about her 61-year-old mother, who is suffering from side effects due to an illegally performed filler procedure.

“I regret so much allowing and even persuading my mother to receive filler injections for her 60th birthday,” Kang wrote.

She had felt sad listening to her mother grumble about her “drooping cheeks” while looking in the mirror and talking about the old days when she was beautiful. But instead of taking her mother to a clinic after thorough research, she handed over her credit card, never suspecting that such a minor procedure would leave her mother with a swollen face for more than a year.

“My mom’s friend recommended that she receive filler injections at this beauty salon that does it illegally. Of course, both of them were unaware that was an illegal clinic,” wrote Kang. “There are so many skin care parlors that do Botox and filler procedures and lure older people who do not have much information by giving them discounts.”

Unlike young people who obtain much information through the Internet, many older people are not tech-savvy, tending to trust anyone holding a syringe and wearing a white gown.

“A doctor whom I took my mother to said the illegal clinic may have used a cheap filler instead of a certified one,” said Kang.

Kim, of Real Cosmetics Clinics, says that as more and more people find out about this “easy way to become beautiful that doesn’t include anesthesia, a lengthy recuperation time and knife,” there’s always going to be demand.

“Although it is a minor procedure, it is important to discuss your options with a professional and undergo a procedure with a licensed professional,” says Kim.

“Cosmetic surgery is inextricably linked to the ethics of plastic surgeons. Unlike other medical procedures, a large percentage of plastic surgery cases in the country are not for therapeutic purposes, but for aesthetics. Doctors each have different boundaries as to how far they will go in allowing the elective procedures for their patients. Therefore, it is important for patients to listen to doctors’ advice, but they must not have blind faith in everything they say.”