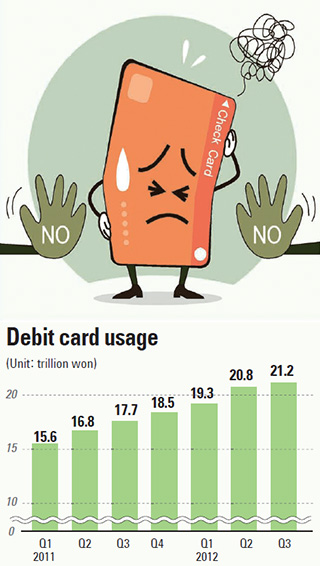 An office worker surnamed Nam was embarrassed in front of his college friends when he recently tried to pay for drinks at a year-end party at a bar in Seoul.

The staff at the bar swiped Nam’s card several times, but the payment wouldn’t go through.

Nam, 37, later learned that his debit card didn’t work because his bank was conducting maintenance checks on the computerized system.

“My friend had to pay,” Nam said. “I tried to show off but instead I was ashamed.”

But shoppers still find debit cards unattractive because they can’t use them past midnight at bars, restaurants and online shopping malls whenever banks undergo maintenance checks on their computerized systems.

The maintenance checks can take up to four hours, and during these hours, debit cards’ financial transactions are completely blocked.

Financial Services Commission Chairman Kim Seok-dong had an embarrassing experience in June when he went on a business trip to Thailand.

He went to a department store in Bangkok to buy some gifts for his family. 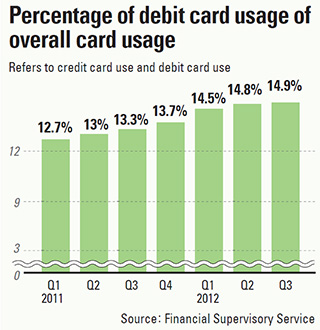 But when he handed over his debit card to a sales representative, it didn’t go through.

“Kim had mentioned he will boost debit card use at that time, but he was baffled when he directly experienced the downside of debit cards,” said an official at the FSC.

Shoppers say getting a refund for canceled debit card purchases can be a hassle as it takes up to three days.

They say getting a refund for a canceled debit card purchase takes days because a store needs to notify the card firm of the cancelation.

The firm undergoes a series of checks before refunding the money to a customer’s bank account.

According to the Financial Supervisory Service, debit card spending totaled 21.2 trillion won ($19.7 billion) in the third quarter, up from 17.7 trillion won on-year.

Debit card usage makes up 14.9 percent of overall card use, up from 13.3 percent on-year.

Critics called on the government to improve the convenience of debit card use by amending the current system.

In light of the criticism, the government plans to allow shoppers to purchase up to 300,000 won of goods and services per month interest-free even if their bank accounts are at zero.