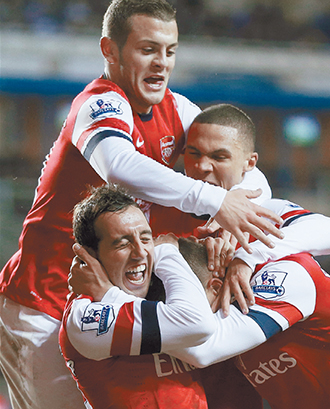 READING, England - Santi Cazorla scored a hat trick Monday as Arsenal emphatically bounced back from its recent disappointments with a 5-2 win at last-place Reading in the Premier League.

Coming off an embarrassing loss on penalties at fourth-tier Bradford in the League Cup last week, Arsenal was back to its best for the first hour at the Madejski Stadium, attacking at will and taking a 4-0 lead when Cazorla netted his third in the 60th minute.

Reading then somehow made a game of it by scoring two cheap goals in five minutes, but Cazorla settled any nerves by setting Theo Walcott up for the fifth in the 80th. Lukas Podolski opened the scoring for Arsenal in the 14th, while Adam Le Fondre and Jimmy Kebe netted for Reading.

The win lifts Arsenal back up to fifth place, two points behind Tottenham and Chelsea, and more importantly restored some confidence after last week’s fiasco at Bradford and a stretch of inconsistent league results.

“We showed people, hopefully, the real Arsenal,” said Walcott, who was given a rare chance to play up front rather than his usual place on the wing.

Cazorla and Podolski had been among several Arsenal players to struggle recently but the Spaniard especially seems to have recovered his flair and creativity after imposing his will on the Reading defense throughout the game.

It was Podolski, though, who put Arsenal in front after laying the ball off to Kieran Gibbs on the left flank and then running into the area to meet the defender’s cross. The German controlled the ball with one deft touch before firing a shot past goalkeeper Adam Federici.

Podolski then turned provider for Cazorla’s first goal in the 32nd minute, running down the left flank and sending a perfect cross in toward the Spanish midfielder, who dove in to send a header into the near corner. Cazorla then added his second just two minutes later from a similar spot after Walcott’s cross from the right was headed back by Gibbs. Cazorla controlled the ball with his back toward goal before turning and slotting it into the bottom corner.

Arsenal kept attacking after the break, and Cazorla completed his hat trick after a textbook attack by the Gunners. Jack Wilshere released Podolski down the left side of the area, and the German slotted another cross back toward Cazorla to drill the ball in at the far post.

Arsenal then relaxed, with Gibbs turning the ball over sloppily in midfield and Jay Tabb feeding Le Fondre, who calmly rounded goalkeeper Wojciech Szczesny to slot into an empty net. Kebe then slotted home the second after a failed offside trap by the Arsenal defense.

“I thought our response in the second half was excellent,” said Reading manager Brian McDermott, whose team has just nine points from 17 games. “We gave our home crowd something to cheer about.”

But the Gunners - who rallied from 4-0 down at Reading in the League Cup in October to win 7-5 after extra time - ended any hopes of a comeback when Cazorla led a quick counterattack and released Walcott into the area, and the England winger stepped back inside before slotting a curling effort into the far corner.

That capped off a night in which Arsenal manager Arsene Wenger said he saw some “very encouraging signs” from his squad.

“I’ve said many times I believe in this team,” Wenger said. “We need now to go from strength to strength.”