Lin shines in MSG again, this time as a Rocket

Lin shines in MSG again, this time as a Rocket 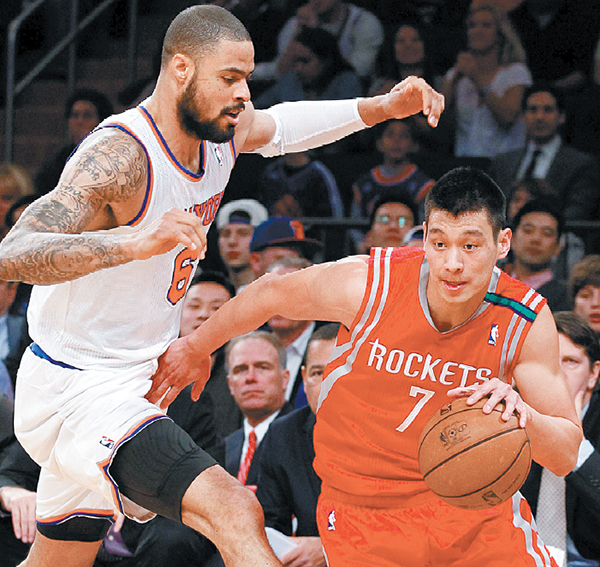 NEW YORK - His old fans booed him. His old friend clobbered him.

Otherwise, it was Linsanity all over again at Madison Square Garden.

Jeremy Lin had 22 points and eight assists in his return to New York, leading the Houston Rockets to a 109-96 victory Monday night that ended the Knicks’ 10-game home winning streak to open the season.

Cheered then jeered, and later floored by Tyson Chandler’s flagrant foul, Lin added another masterpiece to the ones he put together last season during the height of his memorable run.

No longer the fan favorite he was when wearing the home uniform, Lin got a mixed reception when he left the game with 2:25 remaining and the Rockets leading by 16.

James Harden had 28 points and 10 rebounds for the Rockets, who blew out the Knicks for the second time this season. They have won the last seven meetings, including a 131-103 rout in Houston on Nov. 23.

Rookie Chris Copeland scored a career-high 29 points for the Knicks, who played without leading scorer Carmelo Anthony and had their four-game winning streak snapped. They fell to 18-6, matching the record they finished last season with under Mike Woodson.

Woodson’s team decided not to match Houston’s contract offer to Lin, and nobody could argue when Raymond Felton, Jason Kidd and Pablo Prigioni led the Knicks to the best record in the Eastern Conference with a team that led the NBA in fewest turnovers.

But Lin was the best point guard on the floor, just as he so often was during his dazzling run last winter, when the NBA’s first American-born player of Chinese or Taiwanese descent went from undrafted benchwarmer to the biggest story in basketball.

Felton scored 14 points but shot 7 of 18. Kidd was 2 for 9, and both committed three turnovers.

The Rockets outscored the Knicks 54-29 over the middle two quarters, denying New York its first 11-0 start at home since the 1991-92 season.

The Knicks trailed by just five midway through the third quarter before the Rockets blew it open with a 15-0 run, with Lin either scoring or assisting on five of their six baskets.

His layup opened the run, and he then found Marcus Morris for a layup and a 3-pointer for a 67-55 Houston lead. Lin assisted on the second of Harden’s consecutive 3-pointers, then had a steal and layup that gave Houston a 75-55 cushion.

Lin saw some fans wearing his old jersey, but said he didn’t let his mind drift back to last season during the game.

“I’ve moved on, they’ve moved on,” he said. “We have good memories, but at the same time we’re all in a different place now.”

Lin doubled his scoring average in what he called an up-and-down season so far.

“I hope this is the start of a nice run for him, because he works really hard,” Rockets coach Kevin McHale said. “He’s a great kid. He deserves it.”