Chaebol owners start to lean on their daughters

Chaebol owners start to lean on their daughters 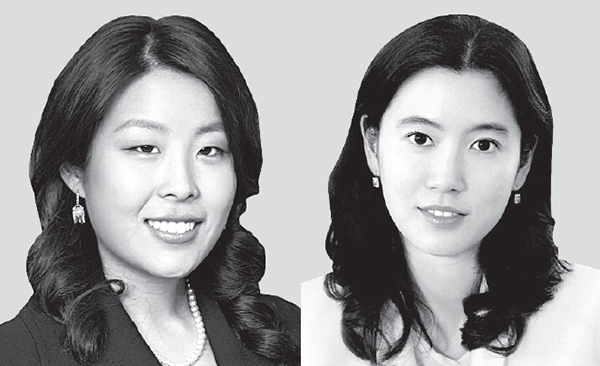 
Bucking a tradition that favors the sons of owners of top conglomerates, female scions are becoming more active in the businesses.

There’s growing speculation that some of the women of this generation could actually take over a family business or two.

Although some women already head family businesses, including Hyun Jung-eun, Hyundai Group chairwoman, the numbers have been limited due to the tradition of family spoils being reserved for the menfolk.

Hyun took over one of the biggest conglomerates in Korea, the Hyundai Group, after her husband Chung Mong-hun committed suicide in 2003.

The latest of the young women to enter the workforce is Hyun’s younger daughter Chung Young-yi. The 28- year-old Chung has been working at Hyundai U&I, a logistics affiliate of Hyundai Group, since June.

Chung, who earned an MBA at Wharton School in Pennsylvania, is said to have keen interest in information and telecommunication.

Her older sister Chung Ji-yi, 35, has already been trained by her mother to climb the ranks in the conglomerate. She is considered heir apparent to her mother.

Ji-yi is currently the senior managing director of Hyundai U&I.

She started to help her mother a few months after her father committed suicide. She was just 27 years old at the time. Ji-yi, who had a keen interest in advertising and earned a master’s degree in media, started in Hyundai Merchant Marine’s accounting department as a rank-and-file employee and was promoted a year later.

Ji-yi assists her mother at major events including visits to North Korea, where Hyundai Group has a major tourism business.

The older sister owns 9 percent of Hyundai U&I while her mother owns the controlling 68 percent.

If Ji-yi succeeds her mother, she could control Hyundai Group (including Hyundai Logistics, Hyundai Elevator and Hyundai Merchant Marine) through the cross-holdings the companies have in each other.

The youngest of Hyun’s children is a boy, Chung Young-seon, 27, who is studying in the U.S.

Another female scion the business community is taking an interest in is Lim Se-ryeong, the oldest daughter of Daesang Group Chairman Lim Chang-wook. Lim, 36, is also the ex-wife of Jay Y. Lee, heir apparent at the nation’s largest conglomerate, Samsung. Their marriage ended after 11 years in 2009.

Since the divorce, Lim has kept a low profile while reportedly spending most of her time tending to her young children. Her prior business experience was working as preesident of Daesang HS, an unlisted restaurant and franchise subsidiary. However, since earlier this month Lim has been playing a more active role in her father’s food conglomerate.

Lim took the position as managing director of the group’s brand management, marketing and design department.

Younger sister Lim Sang-min, 32, who was a candidate to succeed her father before her sister divorced, joined the group in October.

The younger sister is head of the group’s strategy and planning department, which is in charge of finding new businesses and expanding global projects.

The Daesang Group chairman only has two daughters. The industry is following closely which will take over. By stake, the younger sister has the upper hand as she owns 38 percent of Daesang Holdings, whereas her older sister only own 20 percent.

Hanjin Group Chairman Cho Yang-ho’s daughters are also known for being active in the family business. Eldest daughter Cho Hyun-ah, 38, is the senior managing director at Korean Air, after joining the company in 1999. In recent years she has become more active in marking and promotion. She has also been seeking to erect a hotel near Gyeongbok Palace in central Seoul, which is currently on hold due to strong public opposition.

At Daesang, people acknowledge the daughters are more active in the family business, but they deny they’re trying to succeed their father.