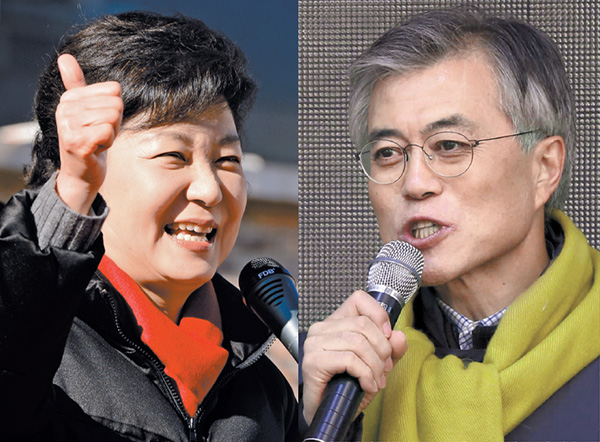 
With the presidential race in a dead heat on the eve of the election, presidential front-runners Park Geun-hye and Moon Jae-in yesterday made their final appeal to supporters and possible swing voters.

Park, the candidate of the Saenuri Party, yesterday asked voters to elect her as the country’s first female president, reiterating a promise to come to the aid of the slowly dwindling Korean middle class.

Moon, the nominee of the largest opposition Democratic United Party, urged voters to prevent the Saenuri Party from running the country for another five years.

At a press conference held at the conservative ruling party’s headquarters in Yeouido, western Seoul, Park reminded her supporters of the economic development achieved during the controversial rule of her father, the late strongman Park Chung Hee. 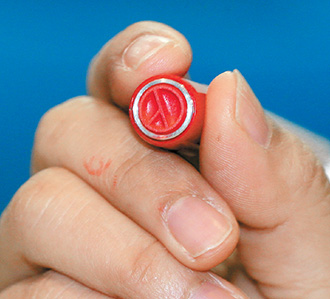 On the final day of campaigning before today’s election, an official from the National Election Commission holds a voting seal. [YONHAP]

“I will once again realize the promise of ‘Let’s live better,’?” Park said, using the slogan of her father’s Saemaeul Movement in an apparent move to appeal to older, conservative voters.

“I will only think about the people’s livelihoods,” Park said. “I will make 70 percent of the population middle class.”

She also promised to open up a new political era by ending regionalism and factionalism and asked voters to trust in her “motherly” leadership.

At his press conference, Moon focused on what he called the disappointments of Saenuri Party rule.

“We’ve witnessed the lack of qualifications of the Saenuri Party,” Moon said from his party’s headquarters in Yeongdeungpo District, western Seoul. “We need a completely new team.”

Holding Park partly responsible for the five years of the current Lee Myung-bak administration, Moon said the people will reject the high-handedness and arrogance of the government and the ruling party.

“The people suffered so much from inconvenience, insecurity, dissatisfaction, distrust and lack of communication,” Moon said. “Unless we change the administration, they won’t repent. If we don’t reprimand them, they will repeat their wrongdoings. The time has come for us to use canes to punish them. Tomorrow is the moment.”

Moon also accused the Lee administration of abusing its power to interfere with the election. “No schemes and irregularities can reverse the people’s hearts,” Moon said. “And the history of our elections is the proof.”

Following their press conferences, the two front-runners yesterday made campaign stops for the last time focused on the battlegrounds of Seoul and Busan.

Park moved to Changwon, South Gyeongsang, and then visited Busan and Daejeon. She concluded her campaign with a rally at Gwanghwamun Square in central Seoul in the evening.

Moon chose a similar route but in the opposite direction. After visiting Garak Market in southern Seoul, Moon went to Cheonan in South Chungcheong, Daejeon and Daegu. He concluded his campaign with a climactic event in front of the Busan Train Station.

Experts said it’s never been harder to predict the winner of a Korean presidential election.

“It is the most neck-and-neck race in history,” Yoon Hee-woong, senior researcher at the Korea Society Opinion Institute, told the JoongAng Ilbo. “Because of various last-minute factors, the outcome is not fixed at all. The voters are split into the younger and older generations, and the turnout of each age group will eventually decide the outcome.”

Lee Jun-han, a political science professor at the University of Incheon, agreed. “It’s a dead heat,” Lee said. “It seems tighter than the 1997 election in which Kim Dae-jung’s victory was decided by 390,000 votes. Because this is an unprecedented contest between the conservative and the liberal, the turnout will likely go up.”

Lee said he believes Moon’s superior performance in Sunday’s debate and the withdrawal of Unified Progressive Party candidate Lee Jung-hee the same day could sway the election in favor of the DUP contender.

Hong Sung-gul, a professor of public administration at Kookmin University, said Park would likely win because voters will favor her conservatism at a time of jitters both economically and in regards to security issues involving North Korea and China.

According to Yonhap News Agency, the National Election Commission predicted a turnout of around 70 percent. The commission said its poll conducted on Dec. 6 and 7 showed that 79.9 percent of eligible voters said they will cast ballots. The poll result is always higher than reality, the commission said.

The commission also said the winner would be revealed between 11 p.m. and midnight because the race was extremely tight. The commission said ballot counting is expected to continue overnight and will be complete around 2 a.m. tomorrow.

As the race is extremely tight, political analysts said the possibility is also growing that the winner may have more than 50 percent of the vote. Since the country adopted direct presidential elections in 1987, no president has won more than 50 percent because of votes that went to marginal candidates.

If Park or Moon wins more than 50 percent, it will be the first time in 41 years since Park Chung Hee won the presidency with 53.19 percent in the 1971 election.