A plant Hyundai Heavy Industries constructed in Nigeria in 2011 [YONHAP]


Four Korean employees of Hyundai Heavy Industries and two Nigerian colleagues were kidnapped by unidentified men Monday while on duty at a construction site in the state of Bayelsa in southern Nigeria, the Ministry of Foreign Affairs and Trade said yesterday.

According to the ministry, four Korean employees of Hyundai Heavy Industries, a leading construction firm, and two local workers were abducted at around 3 p.m. Monday by an armed group in Brass, a local government area in Bayelsa State in the Niger Delta region.

All six abducted men were taken onto a speed boat, the ministry said, but one Nigerian was ordered off the boat and he swam back to the construction site.

“We haven’t received any contact from the kidnappers yet,” said a senior Foreign Ministry official. “We plan to closely cooperate with local police for their safe release.” 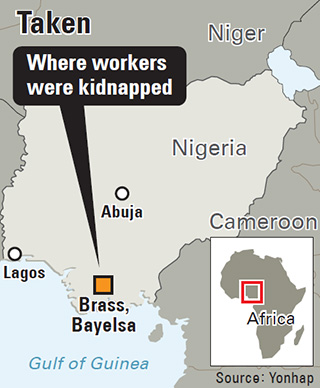 The official added that based on past incidents, kidnapping in Nigeria is different from other areas such as Somalia.

“In Nigeria, security is being well maintained [by the local police],” he said.

The Foreign Ministry yesterday convened an emergency task force meeting with related government offices as well as officials from Hyundai Heavy Industries to discuss a response.

The company also set up an emergency situation room in its headquarters in Ulsan.

The four Koreans, aged 34 to 59, were based in Ulsan before being sent to Nigeria for a two-year tour early this year.

The kidnappers’ demands are unknown, a ministry official said.

According to the ministry, there have been four previous abduction cases involving Koreans in Nigeria since 2006.

In January 2007, nine Korean Daewoo Engineering and Construction workers and one local employee were kidnapped by an armed group in Ogu, Bayelsa, and were released after three days. In May 2007, three Korean workers from the same company were abducted at a thermoelectric power plant construction site in Port Harcourt. They were freed in six days after ransom talks.

“After we heard about the abduction, we called [one of the abducted employee’s] family members and notified them,” said a senior-level employee at Hyundai Heavy Industries. “The family, shocked by the news, urged their safe release.”