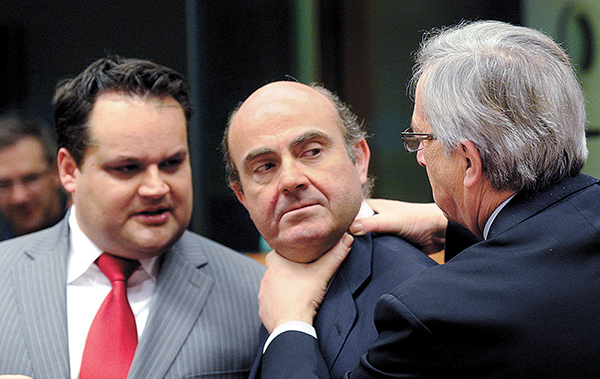 “Why did no one see the crisis coming?” Queen Elizabeth II asked economists during a visit to the London School of Economics at the end of 2008. Four years later, the repeated failure of economic forecasters to predict the depth and duration of the slump would have elicited a similar question from the queen: Why the overestimate of recovery?

Likewise, the IMF now predicts that the European economy will be 7.8 percent smaller in 2015 than it thought just two years ago. Some forecasters are more pessimistic than others (the OBR has a particularly sunny disposition), but no one, it seems, has been pessimistic enough.

Economic forecasting is necessarily imprecise: too many things happen for forecasters to be able to foresee all of them. So judgment calls and best guesses are an inevitable part of “scientific” economic forecasts. But imprecision is one thing; the systematic overestimate of the economic recovery in Europe is quite another.

Indeed, the figures have been repeatedly revised, even over quite short periods of time, casting strong doubt on the validity of the economic models being used. These models, and the institutions using them, rely on a built-in theory of the economy, which enables them to “assume” certain relationships. It is among these assumptions that the source of the errors must lie.

Two key mistakes stand out. The models used by all of the forecasting organizations dramatically underestimated the fiscal multiplier: the impact of changes in government spending on output. Second, they overestimated the extent to which quantitative easing (QE) by the monetary authorities - that is, printing money - could counterbalance fiscal tightening.

Until recently, the OBR, broadly in line with the IMF, assumed a fiscal multiplier of 0.6: for every dollar cut from government spending, the economy would shrink by only 60 cents. This assumes “Ricardian equivalence”: debt-financed public spending at least partly crowds out private spending through its impact on expectations and confidence. If households and firms anticipate a tax increase in the future as a result of government borrowing today, they will reduce their consumption and investment accordingly.

On this view, if fiscal austerity relieves households of the burden of future tax increases, they will increase their spending. This may be true when the economy is operating at full employment - when state and market are in competition for every last resource. But when there is spare capacity in the economy, the resources “freed up” by public-sector retrenchment may simply be wasted.

Forecasting organizations are finally admitting that they underestimated the fiscal multiplier. The OBR, reviewing its recent mistakes, accepted that “the average [fiscal] multiplier over the two years would have needed to be 1.3 - more than double our estimate - to fully explain the weak level of GDP in 2011-12.”

The IMF has conceded that “multipliers have actually been in the 0.9 and 1.7 range since the Great Recession.” The effect of underestimating the fiscal multiplier has been systematic misjudgment of the damage that “fiscal consolidation” does to the economy. This leads us to the second mistake. Forecasters assumed that monetary expansion would provide an effective antidote to fiscal contraction. The Bank of England hoped that by printing ￡375 billion of new money, ($600 billion), it would stimulate total spending to the tune of ￡50 billion, or 3 percent of GDP.

But the evidence emerging from successive rounds of QE in the U.K. and the U.S. suggests that while it did lower bond yields, the extra money was largely retained within the banking system, and never reached the real economy. This implies that the problem has mainly been a lack of demand for credit.

These two mistakes compounded each other: If the negative impact of austerity on economic growth is greater than was originally assumed, and the positive impact of quantitative easing is weaker, then the policy mix favored by practically all European governments has been hugely wrong. There is much greater scope for fiscal stimulus to boost growth, and much smaller scope for monetary stimulus.

This is all quite technical, but it matters a great deal for the welfare of populations. All of these models assume outcomes on the basis of existing policies. Their consistent over-optimism about these policies’ impact on economic growth validates pursuing them, and enables governments to claim that their remedies are “working,” when they clearly are not.

This is a cruel deception. Before they can do any good, the forecasters must go back to the drawing board, and ask themselves whether the theories of the economy underpinning their models are the right ones.

* The author is professor emeritus of political economy at Warwick University and a fellow of the British Academy in history and economics.