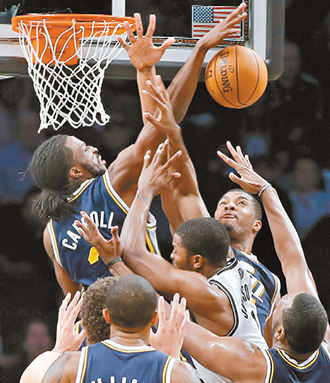 NEW YORK - The Utah Jazz fought all night for a chance to win the game, then nearly threw it away.

Utah turned it over on two passes in the final 31 seconds, having to sweat out a pair of misses on the Brooklyn Nets’ final possession to escape with a 92-90 victory on Tuesday night.

“Just two mistakes. That’s all I can say, just two bad mistakes we made,” center Al Jefferson said. “The game, we still pulled it out, that’s all that matters.”

Mo Williams scored 19 points, and Jefferson had 16 points and 11 rebounds for the Jazz, who improved to just 5-10 on the road. Derrick Favors added 13 points against his former franchise.

Williams said it was easy to focus on the final half-minute - calling it a learning experience - but noted that the Jazz held the Nets to 33 points in the second half. Brooklyn made only 10 of 32 shots (31 percent) after halftime after shooting 51 percent in the first half.

Joe Johnson scored 21 points for the Nets, who led for most of the game and by as many as 13 points before dropping their second straight overall and their fifth in the last six home games.

“When you’re at home, this is where you’re supposed to be the strongest and when you have a lead, I was just hoping man we can blow a team out so we can kind of us, as starters, get a rest for tomorrow,” Johnson said. “It just seems when we’re up 15, 17, it seems like the game is never over because we shoot ourselves in the foot with turnovers.”

Brook Lopez finished with 16 points and Deron Williams had 14 for the Nets, who will try to bounce back from this disappointment when they make the short trip to visit the Knicks on Wednesday.

Utah trailed for nearly the entire night before finally going ahead when Mo Williams pulled up for a 3-pointer in transition, making it 82-80 with 5:43 remaining. Favors followed with a basket, and Utah kept either a two- or four-point lead the remainder of the way.

The Jazz didn’t make it easy on themselves at the end.

Leading by four, they threw the ball in from the sideline, but Gordan Hayward’s pass went untouched out of bounds on the other sideline, giving possession back to the Nets. Johnson followed with two free throws with 22 seconds left, and the Jazz then passed it in from the side again after a Nets foul.

Hayward was replaced as the inbounder by DeMarre Carroll, but Carroll’s pass was tipped and taken away from Jefferson, setting off the frantic final possession. Both Jefferson and Mo Williams thought Carroll was trying to get a timeout.

The Nets pushed the ball up and got a potential go-ahead 3-pointer from Gerald Wallace that missed. Reggie Evans’ follow shot was no good and time expired.