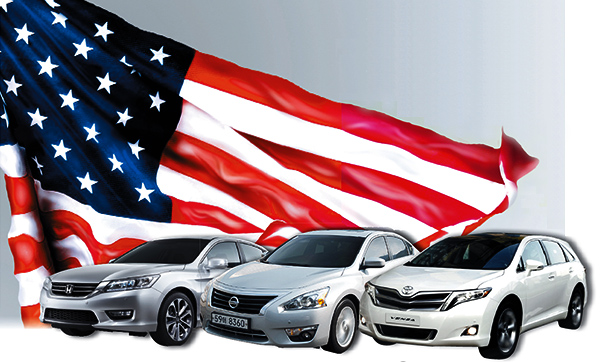 But they don’t have models that run on diesel, the new hot trend in Korea.

In October, Nissan started importing the Altima, its best selling midsize sedan, from a Tennessee plant. Toyota followed last month with the Venza, a crossover utility vehicle (CUV) built in a Kentucky plant.

On Nov. 30, No. 3 Japanese automaker Honda introduced the Odyssey, a minivan and the Pilot, a sports utility vehicle, both made in its plant in Alabama. Last Wednesday, the company introduced the new Accord, a popular midsized sedan, and Crosstour, a CUV. Both are made in a plant in Marysville, Ohio.

For Honda, this was the first time that it imported products from the U.S. rather than from Japan. The automaker is also planning to import the CR-V, an SUV, and Civic, a compact sized car, across the Pacific next year.

Japanese automakers said one reason they bring U.S. models to Korea is that they want to avoid the high-yen situation and get the benefit from the Korea-U.S. free trade agreement which went effect this year.

From March 15, the tax imposed on automobiles imported from the U.S. was halved from the previous 8 percent. The tariff will be completely abolished from 2016, according to the Korus FTA.

Cars imported from Japan are subject to an 8 percent duty.

“We have factories around the world,” said Nissan Korea CEO Kenji Naito during the launch ceremony for the Altima. “We will bring cars that are wanted by Korean drivers.”

Another reason for importing U.S.-made cars is that automakers think Koreans’ taste in cars is similar to that of American drivers, who prefer vehicles with roomy interiors and fancy designs. 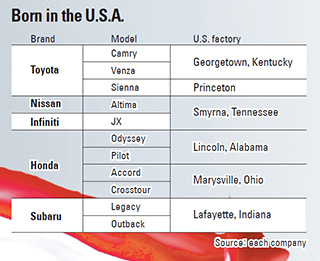 As an example, Korea was the first country outside North America to receive the Toyota Venza. The CUV was exclusively sold in North America from 2008.

“We think that a vehicle that combines the automobile culture of America and the high standard of Korean customers would bring a good result here,” said Toyota Korea President Hisao Nakabayashi at his vehicle’s introduction ceremony last month.

While each import is different in design and features, there is one thing they share in common: all the U.S.-built Japanese cars have gasoline engines.

“In the U.S., diesel is more expensive than gasoline so there is not much demand for diesel cars,” Kerry McClure, a principal engineer at Honda R&D America, said. “It will take some time and money to develop a good diesel engine for some of our models.”

But in Korea’s imported car market, drivers have been moving to diesel cars as the price for gasoline remains high.

Last year, only 35.3 percent of foreign cars sold in Korea were diesels, but now they account for 50.9 percent, according to data from the Korea Automobile Importers and Distributors Association (Kaida). In addition, among Kaida’s 10 best-selling models for this year, six are diesels. This is one of the reasons that German brands are doing well in Korea, as they specialize in diesel engines.

Japanese automakers do sell diesel models in Europe and can also benefit from duty breaks from the Korea-EU FTA that went effect last year.

Honda revealed it is planning to introduce diesel cars to Korea in the near future.

“Honda has plans to expand cars with small-diesel engines,” said Hiroshi Kobayashi, chief operating officer for Honda’s regional operations in the Asia Oceania Region, during a visit to Korea last month. “We know diesels sell well in the Korean market, so we are actively reacting to the trend.”

But some auto experts said it will be tough for Japanese automakers to turn on a dime in diesels. Unlike European brands, they have been concentrating on developing hybrids or electric vehicles, not clean-diesel cars.

“Even if they want to import diesels from Europe, they will not find proper models to generate successful sales here,” said Kim Pil-soo, a professor of automotive industry studies at Daelim University College. “What’s more important is that local consumers’ perception of Japanese diesel cars is not as good as for German diesel cars.”

For instance, Infiniti, the luxury brand of Nissan, was the first among Japanese auto brands to release diesels in Korea. It introduced the FX30d, an SUV, in February and M30d, a full-size sedan, in August. However, both models have yet to satisfy their sales goals. The FX30d sold 63 units, while M30d was bought by only 75 drivers through November. Infiniti originally planned to sell 20 FX30ds and 40 M30ds per month.

For now, Japanese companies will be concentrating on increasing sales of gasoline models.

Toyota’s Camry, a midsize sedan from a Kentucky plant, is currently the third best-selling imported car after 5,108 units were sold through November. “If the vehicle is good enough, it will appeal to customers,” Daelim’s Kim said. “Customers can find advantages in after-sales services, or other criteria, so we still have to watch how these Japanese models perform in the market.”