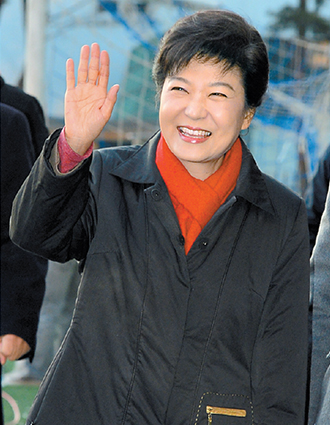 The 60-year-old scored 51.9 percent of the votes as of 10 p.m. yesterday, maintaining her narrow lead over liberal rival Moon Jae-in of the opposition Democratic United Party, who had scored 47.7 percent at the time, when 57.3 percent of the ballots were counted.

Yesterday’s victory will put Park back in the Blue House, the nickname of Korea’s presidential compound, where she spent her teenage years and also served as acting first lady after her mother’s assassination in 1974. Park left the Blue House after the 1979 assassination of her father by his own spy chief.

Korean voters chose the conservative stands of Park in the midst of concerns about an economic slowdown or recession and security challenges by North Korea. While her opponent Moon promised major reforms of the country’s conglomerates and its established political order, Park’s pledges were more about stability and a “grand national unity.”

Exit polls announced immediately after the polls showed a dead heat. Park was narrowly leading the match against Moon within the margin of error in two polls.

Park cast her ballot around 8 a.m. at a polling station in Samseong-dong, southern Seoul.

“I will wait for the people’s decision with a humble heart,” said Park. “I am truly thankful to all the people who were with me during the campaign.”

She urged voters to cast ballots to start a new era for the country. Asked if she had an auspicious dream, Park just shook her head and smiled.

Throughout the day, Park stayed alone at home while her aides gathered at Saenuri Party headquarters to anxiously watch the ballot counting.

After the exit polls were announced, the mood at the conservative ruling party quickly became sanguine. Around 9 p.m., major broadcasters began naming Park as the definite winner and officials cheered loudly.

Park was scheduled to visit Saenuri Party headquarters and Gwanghwamun Square in central Seoul later in the night to give thank you speeches to voters.

Voter turnout was 75.8 percent, the highest since the landmark election of 1997 that gave a liberal, Kim Dae-jung, power for the first time in Korea’s history. Turnout in that year was 80.7 percent.

The turnout five years ago was 63 percent, an all-time low for a presidential race. As of 4 p.m. yesterday, the number of voters was already higher than the total turnout of the 2007 vote.

Analysts were surprised at the turnout.

“When politics are stable, the turnout tends to fall,” said a polling expert. “It was a surprise to see the unprecedentedly high turnout.”

According to a KBS-MBC-SBS exit poll announced at 6 p.m., right after the polls closed, Park scored 50.1 percent while Moon earned 48.9 percent. The poll had a 95 percent confidence level with a margin of error of plus or minus 0.8 percentage point.

The exit poll was jointly conducted by the three major broadcasters. It surveyed 86,000 voters at 360 polling stations nationwide from 6 a.m. to 5 p.m.

A JTBC-Realmeter poll also showed a race too close to call. In that poll, which took place Tuesday and yesterday with 5,000 voters, Park won 49.6 percent while Moon scored 49.4 percent. Its margin of error was plus or minus 1.4 percentage points.

Bae Jong-chan, research director at Research and Research said the one-on-one match between the conservative and liberal attracted voters’ interest and involvement. In past elections, additional candidates ran representing both the conservatives and the liberals.

Analysts said social networking services played a significant role in bringing voters in their 20s and 30s to the polls.

“In the past, they expressed their political interests by participating in demonstrations and protests,” said Kim Hee-gyeong, a political consultant. “This time, the youngsters treated the voting as a new form of entertainment.” 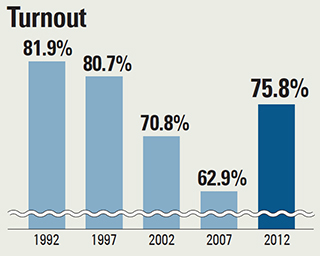 In yesterday’s election, the country had 40.46 million eligible voters, up 2.81 million from the 2007 presidential election. Of the eligible voters, 21.8 percent were in their 40s. The next largest population was those older than 60, who comprised 20.8 percent.

Park has enjoyed higher popularity among elderly voters, while Moon is largely backed by younger voters. The simple demographics of voters by age groups indicated that Park’s supporters could outnumber Moon.

“I’ve done my best, so I will just await my fate,” Moon said after casting his ballot yesterday in Busan’s Sasang District around 7 a.m.

“Voting is the only way for the people’s power to triumph over political power,” said Moon. “We can only achieve new politics, economic democratization, a welfare country and inter-Korean peace through voting. If you were not satisfied over the past five years, change your world with voting.”

Ahn Cheol-soo, the former independent candidate who roiled the race before dropping out after failing to come to terms with Moon on merging their campaigns, cast his ballot at a polling station in Yongsan District, central Seoul, in the morning. Ahn asked journalists, “Did you all vote?” but did not answer any questions.

Later in the afternoon, Ahn left for San Francisco, as previously announced.

“I will remember how I felt when I first began and think about how I can return your love,” Ahn said in a statement released after his departure.

“The victor should embrace the loser, and the loser should accept defeat and cooperate with the new government to open up a new future for the country.”