President-elect gets full perks prior to moving in

President-elect gets full perks prior to moving in 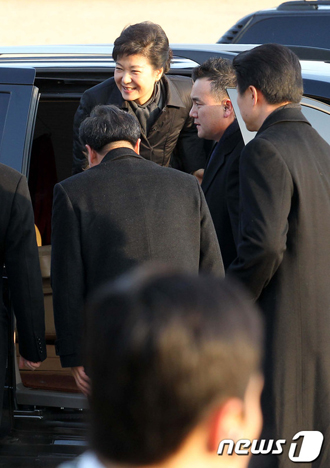 Although the president-elect will move into the Blue House on Feb. 25, the future president will receive special treatment before succeeding President Lee Myung-bak.

According to the National Election Commission, the president-elect will be given authority to engage in power transfer activities, starting with setting up a 24-member committee to prepare for the government transition as soon as elected.

The president-elect will have access to special funds that exist to support transition committee’s activities, including setting up an office at a location of their choice.

In 2002, former President Roh Moo-hyun set up his office inside the Ministry of Foreign Affairs and Trade building in Sejong-ro, central Seoul.

In 2007, President Lee Myung-bak opened his office inside the Korea Banking Institute in Samcheong-dong, central Seoul.

As part of the transition process, the newly-elected president will receive briefings from Cabinet members on administrative-related matters, including the government budget.

The president-elect can also name a prime minister and new cabinet ministers before taking the official oath of office and have the right to ask the National Assembly speaker to hold a confirmation hearing about any named candidate.

They can also form advisors to be in charge of the secretary office and the external office.

The elected president can also ask for manpower support from the current government and funding to pay members of the transition committee.

The president-elect, however, will not receive a monthly salary as president until taking office.

The president-elect will receive the same security protection as President Lee, according to the country’s Presidential Security Service Act.

During the presidential election campaign period, the former candidates had to hire private guards for protection while the police were dispatched as well.

The newly-elected president will be given a bulletproof vehicle and the right to control traffic lights.