From left : A young Park and her family including her father President Park Chung Hee enjoy free time at the Blue House. ;Park greets a military academy cadet during a graduation ceremony as the acting first lady.


Until yesterday, Park Geun-hye was most commonly described as the eldest daughter of the late strongman Park Chung Hee.

In fact, as a first-hand witness to some of the most dramatic moments in modern Korean history, Park could have been described in many other ways. She was the country’s acting first lady after her mother’s assassination in 1974, a five-term lawmaker, the “queen of elections” among politicians and an icon of the conservatives.

Yesterday, Park came out of her father’s shadow and won a title of her own: Korea’s first female president.

Born during the 1950-53 Korean War in Samdeok-dong, Daegu, on Feb. 2, 1952, Park was the first child of Park Chung Hee, then an army major, and Yuk Young-soo, daughter of a wealthy family from Okcheon, North Chungcheong.

One of the incidents that shaped her life came when she was a fourth grader and her father staged the coup of May 16, 1961. Two years later, he was elected the fifth president of the Republic of Korea and she became the eldest presidential daughter.

The assassination of her mother in 1974 ended her smooth life. She returned home from studies abroad in France and became the acting first lady at the age of 22. Park attended public events and greeted foreign dignitaries.

On Oct. 26, 1979, Park went to bed early. Around 1:30 a.m., Chief of Staff Kim Kye-won informed her that her father had been shot dead. It is widely known that Park’s first response was, “Is everything okay in the frontline of the inter-Korean border?” But she was extremely shocked by another tragic assassination of a parent.

She left the Blue House the next month with her younger sister and brother. Chun Doo Hwan, then chief of army security command and eventually president, gave 600 million won ($529,000 at today’s exchange rate) to her. It was the remains of her father’s private slush fund and Park said during a presidential TV debate earlier this month that she would return the money to the state.

From left : Park talks to North Korean leader Kim Jong-il in Pyongyang in 2002. [YONHAP];Park and members of the Grand National Party carry the party sign to makeshift party headquarters in Yeouido, Seoul, in 2004.

Little is known about her life during the 1980s and 1990s until she decided to enter politics in 1997. The Asian Financial Crisis was the event that prompted her decision, she recalled.

“After the crisis, one question lingered in my head,” Park said. “I wondered if I would be able to face my parents after I die because I was living a comfortable life while the country was shaken.”

Eight days before the presidential election in December 1997, Park declared her support for Lee Hoi-chang, then-candidate of the Grand National Party, which later became Park’s Saenuri Party. While Lee lost to Kim Dae-jung, Park scored her first political victory by winning a legislative by-election in the Dalseong District of Daegu in April 1998.

Her landslide opened up a glamorous political path for the former presidential daughter and she served as vice chairwoman of the largest opposition party from 1998 to 2002. But she left the GNP and created her own party in 2002 after conflicts with Lee.

The following May, she visited Pyongyang and met with North Korean leader Kim Jong-il. Kim apologized to Park for the failed assassination attempt of her father on Jan. 21, 1968, by North Korean commandos.

Park returned to the GNP in November 2002 after Lee agreed to accept her reform plans and she supported his second attempt at the presidency. He lost again, and the conservative party faced a crisis over a massive scandal over illegal presidential fundraising.

In March 2004, the party elected Park as its new chairwoman, just weeks before the legislative elections. At the time, the conservative party was in a crisis after its failed attempt to impeach then-President Roh Moo-hyun. 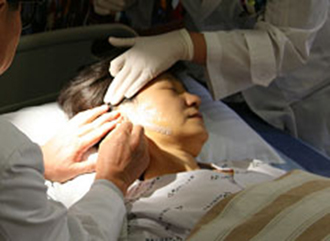 Park receives surgery after she was slashed with a box cutter while campaigning in 2006.

She led dramatic reforms - including the relocation of the party’s headquarters from a fancy building to a makeshift tent - and toured the nation to appeal to voters. By winning 121 seats, the GNP managed to survive under Park’s leadership.

She handed another victory to the GNP in the 2006 local elections, winning the nickname “queen of elections.” During the campaign, Park was attacked by a man who slashed her face with a box cutter. After her surgery, her first question was, “How are things going with Daejeon?” to check on the battleground electoral race.

In August 2007, Park ran in the party’s presidential primary, but narrowly lost to Lee Myung-bak. She supported Lee’s campaign but her relationship with the president frayed after her loyalists faced a brutal purge in the party’s nominations for the April 2008 legislative elections. In 2009, Park challenged the Lee administration’s attempt to scrap the plan to relocate the country’s capital to Sejong City in South Chungcheong. The government eventually gave up its effort and Park maintained her reputation as a politician who lives up to her word. 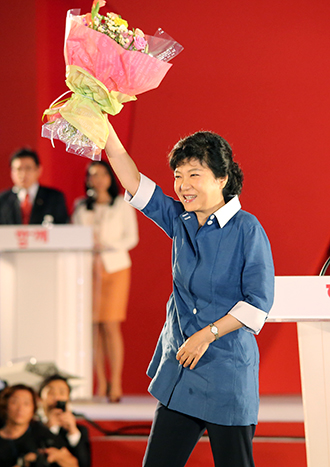 Park thanks supporters at Kintex in Ilsan, Gyeonggi, after she wins the Saenuri Party primary on Aug. 20, 2012. [YONHAP]

The GNP faced another crisis after its Seoul mayoral by-election defeat last year. Park took control over the ruling party once again as an emergency chairwoman and changed the party’s name. After pushing reform measures, Park’s Saenuri Party managed to win 152 seats in the April legislative elections against all odds.

She scored a landslide victory of 84 percent in the Saenuri’s presidential primary in August, becoming the first female nominee to represent a major political party.

Throughout Park’s campaign, the conflicted legacy of her father emerged as the biggest obstacle to her presidential ambition.

Park slid from the front-runner position in the polls due to her reluctance to clearly confront her father’s historical legacy. In September, Park admitted for the first time that her father’s dictatorial rule violated the Constitution.

She continued her campaign to shed historical baggage associated with her father by recruiting high-profile politicians who were loyal to Kim Dae-jung, an icon of democratization and bitter foe of the Park Chung Hee regime.

While Park pushed a reform agenda through the campaign, including various promises of “economic democratization,” it was clear at the end that she had to rely on the memory of her father one last time to appeal to aged, conservative supporters. On the eve of the presidential election, Park reminded the voters of the economic miracle that started under her father, quoting the slogan of his Saemaeul Movement in the 1970s: “Let’s live better!”