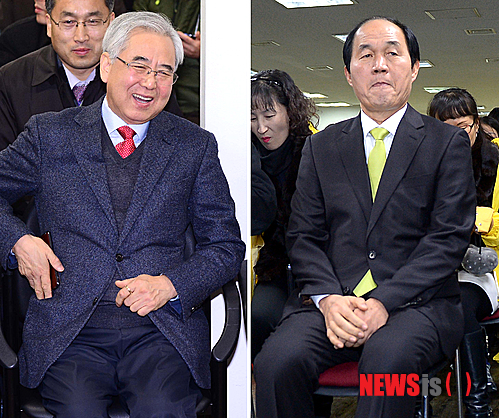 
The former conservative-leaning education minister was elected Seoul city education superintendent in a by-election on Wednesday, an exit poll showed, filling the post vacated by his disgraced predecessor who was convicted of bribery.

Moon Yong-lin garnered 52.6 percent of the vote followed by the left-leaning Lee Su-ho with 39.4 percent, according to an exit poll by the nation's three major broadcasters released shortly after the polls closed at 6 p.m.


The gap far exceeds the poll's margin of error of plus or minus 0.8 percentage point.

The snap election was held on the sidelines of the presidential race as the position has been up for grabs since the former superintendent, Kwak No-hyun, was stripped of his post in September following the Supreme Court's decision to uphold a one-year prison sentence for bribery.

As soon as the result is confirmed, Moon will immediately assume his post administering over 2,300 elementary, middle and high schools, and 80,000 personnel in the nation's largest city of over 10 million people, with a yearly budget of 7 trillion won (US$6.5 billion). The new superintendent's term ends in July 2014.

The 65-year-old had served as education minister in 2000 and mostly upholds President Lee Myung-bak's competition-driven policy on schools.

Moon pledged to maintain autonomous high schools, which were introduced by the Lee administration as part of its drive to raise the quality of public education through competition, as well as the nationalized scholastic test that the president revived in 2008 after 10 years.

The education chief election is not affiliated with a political party, though the candidates tried to highlight their political inclination during campaigns to appeal to voters in respective camps. [Yonhap]