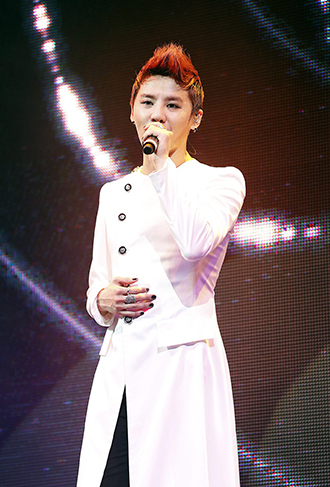 Kim Jun-su’s agency announced that the JYJ member and soloist will treat fans to a song on Christmas Eve.

According to CJeS Entertainment, Kim’s song “Thank U for” was produced by a famous Japanese composer and is a sweet love song perfect for winter.

Kim also said through his agency that the song is like a love letter to a girlfriend.

“I hope that the fans will like it,” said the boy band member, who added that the song was like a gift from himself to his devoted followers.

The “2012 XIA Ballad & Musical Concert with Orchestra” show will incorporate musical pieces as well as songs sung by Kim on various drama soundtracks.

This has been one crazy couple of months for the youngest member of the popular boy band trio.

Last month, he wrapped up his first solo world tour in Germany.

About 1,800 people attended, lifting the total number of fans at his world tour concerts to about 53,800, the agency said.

The six-month tour was comprised of 13 concerts in 12 cities in Asia, North America, South America and Europe. It was the first solo world tour for the 25-year-old singer, who has performed with JYJ since the trio left TVXQ.