Chelsea routs Leeds to set up clash with Swansea

Chelsea routs Leeds to set up clash with Swansea 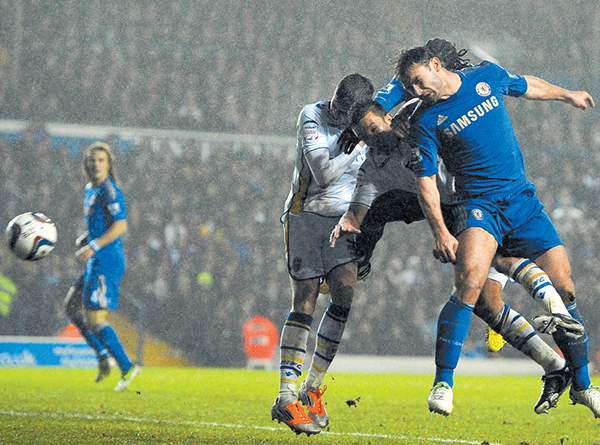 Chelsea’s Serbian defender Branislav Ivanovic scores the second goal during the League Cup quarterfinal between Leeds United and Chelsea in Leeds, northern England, on Wednesday. Chelsea won 5-1 and will meet Swansea City in the semifinal. [AFP/YONHAP]


LEEDS, England - Rafael Benitez has targeted his first piece of silverware with Chelsea after the football club routed Leeds 5-1 to book a League Cup semifinal clash with Swansea City.

Chelsea interim manager Benitez is desperate to lift the League Cup as he tries to stake a claim to take the job on a permanent basis, but the Spaniard also warned his side that they face a tough task to make the Wembley final.

The Blues shook off the effects of jet lag to seal their place in the last four with a stunning five-goal second-half blitz to blow away their Championship hosts in the quarterfinals at Elland Road on Wednesday.

Benitez’s men will host fellow Premier League side Swansea in the semi-final first-leg match in early January, and the former Liverpool boss insists they will have to be at their best to progress.

“Any semifinal of a major competition is going to be difficult,” he said.

“They’re doing well right now so it will be an interesting tie. The motivation is there for both teams to go through.”

Benitez is fighting to win over Chelsea supporters who continue to voice their opposition to the sacking of Roberto Di Matteo - and the choice of the former Liverpool manager to replace the departed Italian.

In the circumstances any trophy, even the often ridiculed League Cup, would be a significant boost to Benitez.

“To win trophies is important for any manager; we’re a game closer to the final at Wembley, so we’ll concentrate on that game when it comes,” Benitez said.

“We take every competition we’re in seriously and we’re a step nearer to the final.”

Chelsea took the first half to overcome the effects of its gruelling 13-hour return flight from the Club World Cup in Japan, falling behind to Luciano Becchio’s 15th goal of the season.

But they stormed back with goals from Juan Mata, Branislav Ivanovic, Victor Moses, Eden Harzard and Fernando Torres’ 13th goal of the campaign to win with something to spare.

The stirring comeback was sparked by a half-time pep talk between the players, and captain Frank Lampard said: “We had a word with ourselves at half-time and upped it because in the first half we weren’t at our best.

“We were a bit slow with the tempo of the game and we gave away a silly goal that allowed them to score. Once we upped it with a bit of pace in our game you could see a big difference.”

Lampard refused to use jet lag as an excuse for Chelsea’s sluggish start as they returned to action just 48 hours after landing back in the country.

“We didn’t make the greatest preparation but there’s no excuse, we had to up it,” he added.

“The early goal after the restart gave us the impetus, we believed from then on and we didn’t think we could lose the game.”