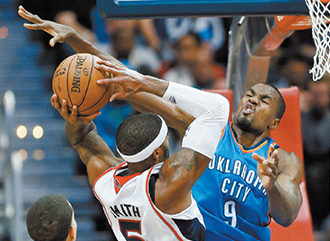 
ATLANTA - Kevin Durant set a season high with 41 points, and the Oklahoma City Thunder held off the Atlanta Hawks 100-92 on Wednesday night for their 12th straight win.

No other Oklahoma City player scored in double figures.

The 12 straight wins matches the longest streak for the franchise since 1996, when it had a 14-game winning streak as the Seattle SuperSonics.

Jeff Teague led Atlanta with 19 points. Josh Smith had 17 points and 12 rebounds. Al Horford and Lou Williams each had 13 points.

The Hawks took their last lead at 19-17 on a follow shot by Anthony Morrow. The Thunder then went ahead with a 10-1 run that overlapped the end of the first period and the start of the second. Martin opened and closed the run with jumpers.

Oklahoma City stretched the lead to 17 on four straight free throws by Durant following fouls by Morrow late in the half.

The Thunder led 68-52 midway through the third quarter, but a technical foul against Smith with 3:12 remaining in the period seemed to spark the Hawks.

Smith sank a 3-pointer as part of Atlanta’s 8-0 run to close the period. Anthony Tolliver scored the first three points of the fourth quarter on a free throw and jam to cut the Thunder’s lead to 73-69.