Apps could make wallets a thing of the past

Apps could make wallets a thing of the past 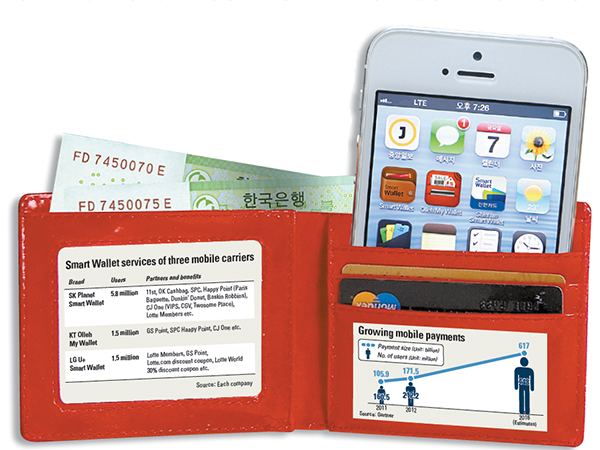 A 38-year-old office worker Choi Hye-jeong forgot her wallet at home and left for work. Usually Choi would go back home to get it, but she didn’t have to turn around, thanks to the credit card app on her smartphone.

Choi paid for her lunch with the app and earned points at a coffee shop through a coupon app. Although Choi did not have her wallet with her, she wasn’t inconvenienced.

As more than half of the country uses smartphones, the electronic wallet, also known as the “Smart Wallet” is changing consumer behavior. A so-called smart wallet is a mobile application that allows consumers to make purchases through their bank, mobile carrier or department store account by providing bank account or credit card information.

While smartphones are replacing point cards that can be used in coffee shops and restaurants as well as credit cards, users’ wallets have become much lighter.

From payment to coupons

Following SK Planet, a series of mobile carriers such as KT and LG U+ and financial institutions like Shinhan Bank and Samsung Card jumped into the smart wallet service sector.

Financial institutions are providing specialized services primarily to its customers, while mobile carriers are focusing on membership of their smart wallet application regardless of what mobile carrier users have.

Customers can provide their bank account number and then have their account charged directly from the app.

The market leader SK Planet has more than 5 million subscribers and the number of membership downloads surpassed 10 million in two years.

As it began early it has more partners and benefits than other competitors. It has expanded the scope of the partnership by establishing an alliance with 30 large retailers and 160 brands.

Other mobile carriers followed suit, with KT introducing “Olleh My Wallet,” and LG U+ presenting “U+ Smart Wallet.

In addition, other smart wallets by financial companies such as “Hana N Wallet” by Hana Bank and “ZooMoney” by Shinhan Bank in partnership with KT are also well known.

One of the retail giants Shinsegae started the smart wallet service for the first time as a retailer.

After making a payment, they can also receive and keep the electronic receipt.

The objective of the smart wallet is to maximize convenience for users. Also, it is for an open platform to connect customers and partner companies.

Consumers usually have to go through a complex process in order to create a membership card offline, but with the smart wallet, they can subscribe to a membership by tapping the smart phone screen a few times.

Not only users, but also the providers of the smart wallet are benefiting, as contact with the customer becomes a little easier.

In particular, the companies are expecting to analyze the customers’ purchase of goods, hours of use and consumer patterns through the smart wallet platform and provide optimized service to the users.

“The company that will first implement the most convenient and optimized service will be the one gaining an edge in the smart wallet market,” said an employee at SK Planet.

Challenges for the market to mature

According to the “2012 Mobile Payment Market Trend” released by the market research firm Gartner in May, the number of mobile payment users for this year was expected to reach 212.2 million, up 51.7 million from last year’s 160.5 million worldwide.

As the mobile payment market expands, the number of consumers using smart wallets to make payments is expected to grow.

However, some experts pointed out that there are still many challenges to be solved in order to expand the market.

The first challenge is to safeguard the security. With smartphones, the issue of security has been raised more than ever due to the discovery of a series of malicious codes targeting personal information.

Especially in the case of a smart wallet, where personal banking information is contained, users could be the target of hackers.

“Eventually, it is important for the company to win the trust, since concerns related to privacy are mounting. The outcome will be determined depending on which company will gain the trust that it can safely protect customers’ personal information,” said Vipin Kalra, managing director and CEO of Visa Australia at the Future of Payments, at the CeBIT Global Conference held in Sydney in September.

A limited service area is also another problem.

Hence, some analysts say that it will take some time for the mobile payment system to emerge in the payment market.