Diesel car drivers should beware of the very cold

Diesel car drivers should beware of the very cold 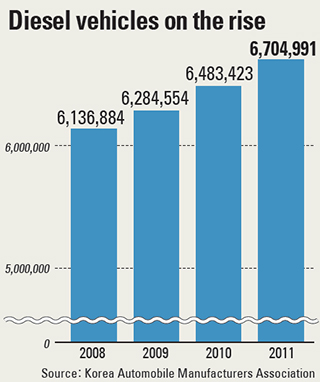 If you’re having trouble starting your diesel car in the morning, your fuel may have been affected by the subzero temperatures.

More and more car buyers are opting for diesel due to the cheaper prices of the fuel at the pump. But at the same time, Korea’s winters are getting harsher.

The government is warning car buyers that diesel fuel, unlike gasoline, gets sluggish and clogs engines when the temperature goes below minus 18 degrees Celsius (minus 0.4 Fahrenheit), said the Ministry of Knowledge Economy.

The government is considering stricter regulations for refining diesel to prevent the situation from getting worse. Around 36 percent of registered vehicles in Korea now run on diesel, and the number of diesel cars is on a steady rise from 6.1 million units in 2008 to 6.7 million units last year.

At issue is the cold filter plugging point (CFPP) of Korea’s diesel. Fuel with a higher CFPP solidifies at a higher temperature.

In November 2011, the government lowered the CFPP standards for Korea’s diesel from minus 16 degrees Celsius to minus 18 degrees Celsius after receiving complaints from vehicle owners about poor performance of their diesel vehicles in colder months.

No complaints have come in this year, the ministry said, but it is voluntarily checking if the standards should be made stricter. “As some regions see low temperatures in the winter, the government continues to review the situation and check if it’s necessary to amend the regulations to avoid problems,” said Na Han-gyun, an official at the Ministry of Knowledge Economy.

“It’s doubtful that anything will change this winter season, but things might get changed for next winter,” said Na, adding that the ministry will decide whether to amend the regulations after the report comes out in May.

Local refineries are not too worried about the possible change of standards as they already have diesel products that work at minus 22 degrees. SK Innovation said it has products that are fine minus 24 degrees Celsius.

Basically, the refiners simply need to put additives in the fuel. “Although we say the fuel will be frozen, it doesn’t mean that the liquid solidifies,” said Na. “Part of fuel becomes jell-ish.”

Diesel imports have grown since July after the government gave tax incentives on the fuel to keep its price low.