Park needs to focus on growth with fairness

Park needs to focus on growth with fairness 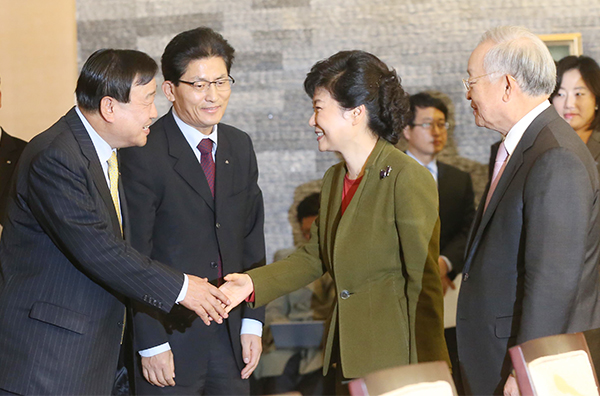 Huh Chang-soo, chairman of the Federation of Korean Industries and former chairman of GS Holdings, left, shakes hands with then-presidential candidate Park Geun-hye at the Korea Chamber of Commerce and Industry on Nov. 8. Sohn Kyung-shik, chairman of KCCI and CJ Group, stands behind Park. By Kim Hyung-soo


Korea’s conglomerates, including Samsung and Hyundai Motor, are breathing easier after the victory of conservative candidate Park Geun-hye in Wednesday’s tight presidential race.

Compared to her liberal rival Moon Jae-in of the opposition United Democratic Party, Park proposed more lenient policies on the chaebol, including a less drastic overhauling of the cross-shareholdings that allow families to control entire groups with small ownership stakes.

However, the conglomerates will have to be wary of Park’s commitments to so-called economic democratization, which could lead to demands of more accountability and sharing of profits with smaller businesses, including suppliers, contractors and even rivals for business, in the name of fairness.

Park’s greatest challenge, though, is seeing the economy into an era of lower growth than it has become used to in the past.

She also inherits a slowly dwindling middle class, a Baby Boom generation that has been retired from corporations but can’t afford retirement, a steadily worrying accumulation of household debt and a real estate market that has been stuck in the mud for years. 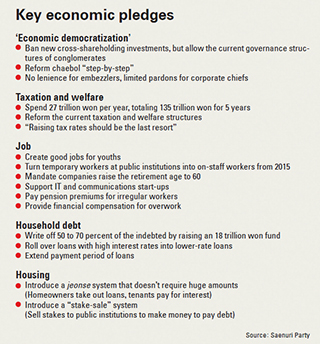 Economic democratization, the key campaign slogan for both Park and her failed rival Moon, is supposed to lead to a more fair playing field for all participants in the economy. The term is political jargon adopted from a lofty goal in the Korean Constitution.

One of the component issues is how to rein in the influence of major conglomerates and give a fairer shot to smaller companies, including those that do business directly with the conglomerates like suppliers, contractors or vendors that rent space in large companies’ shopping centers.

Moon was determined to change the corporate governing structure of the chaebol by forcing them to sell off all their internal cross-share holdings within three years.

In contrast, Park said she would allow conglomerates to keep the current shareholding structures, but will ban any further cross-holdings.

During a Dec. 10 debate between the candidates on economic issues, Park said that forcing conglomerates to sell their cross-shareholdings at a time of economic slowdown would not benefit the public at large.

“Chaebol reform should take place step-by-step in order to minimize side effects for the people,” Park said.

Big business says forcing the conglomerates to end their cross-shareholdings will be so costly that it will inhibit investments for the future and lead to fewer jobs.

It’s also true that major companies would be much more vulnerable to hostile takeovers, even from foreign investors.

Although Park was lenient on the shareholding structure, she wants to limit conglomerates’ additional investments in their affiliates.

In the next five years this limit could be dropped to five percent under Park’s proposal. 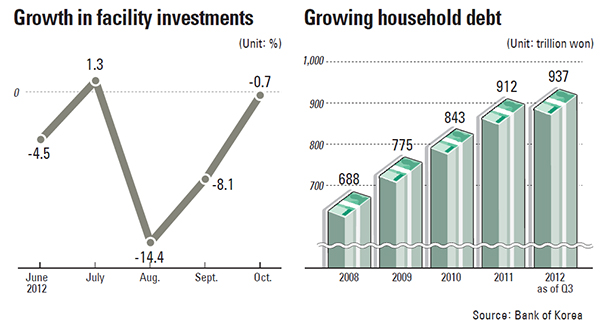 Additionally Park pledged to cut ceiling on the stakes that nonfinancial companies could have in banks from nine to four percent.

Crackdowns on illegal and unfair business practices will likely be boosted too.

During the campaign, Park said corporate chiefs shouldn’t be exempted from imprisonment if they embezzle corporate money. Nor should the president overuse his or her right to grant pardons to business figures, she said, as has happened frequently in the past.

The president-elect is also likely to crack down on companies giving work or orders to their own subsidiaries at the cost of independent companies.

Large retailers will also face tougher rules on opening stores in small cities, where they will steamroll smaller retailers. Park has promised to promote the growth of small merchants.

Park’s policies on taxes will appeal to Big Business.

Park believes “raising tax rates should be the last resort.” The corporate tax rate will probably remain at 22 percent. Korea’s corporate tax rate is below 25 percent, the average of 34 member countries of the Organization for Economic Cooperation and Development. 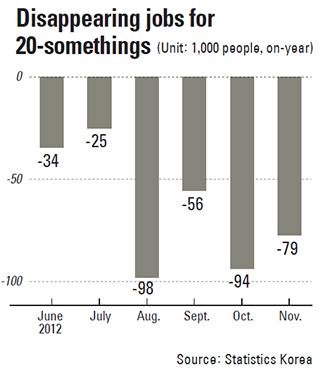 The most immediate problem that the incoming administration faces is how to manage an economy entering a low-growth condition.

Many institutions, including the central bank, have projected this year’s economy to grow below 2.5 percent. Although some hope it may improve slightly at the end of next year, economic growth is expected to be limited within the three percent range.

“The economy will slightly improve next year compared to this year,” said Lim Hee-jeong, an analyst at Hyundai Research Institute. “However, the economy that people will feel will likely remain the same as this year.”

The three percent forecast for next year is an optimistic view based on the assumption that the global economy will bounce back with an easing of worries about the euro zone crisis, the U.S. fiscal cliff and decelerating growth in China.

Unlike predecessor Lee Myung-bak, who had several grand schemes to stimulate the economy, come up with new growth “engines” and reduce taxes and regulation, Park has revealed no major plans to help the economy grow more robustly.

During the campaign her policies were largely focused on “economic democratization.” Additionally, policies supporting small- and mid-sized companies and fostering technology-based industries including IT are long-term strategies, not short-term solutions,

The big question is whether the new administration will come up with a stimulus package and a supplementary budget.

The incumbent administration is focused on balancing its budget and has refrained from the idea of reviving the economy through a supplementary budget.

This is in stark contrast to the early days of the administration when President Lee swiftly used taxpayers’ money to stimulate the economy and protect it from the global financial crisis of late 2008.

Park’s economic team has hinted at the use of a supplementary budget of roughly 10 trillion won. But it’s unclear where the new administration would spend that money. Most of it might go to welfare programs, which accounted for Park’s major pledges.

Analysts say the administration should make policies to maximize the workforce while raising productivity by supporting innovation by companies while lowering regulations.

“To raise potential growth in the long run while stabilizing the macro economy, labor, investment and productivity need to be improved,” said Shin Min-young, analyst at LG Economic Research Institute.

The other economic issue facing Park is the widening gap between the poor and the rich.

Despite the hopes put in the economically capable current administration, many in the middle class have fallen into poverty or are on the edge, especially as household debt continues to grow inexorably.

Jobs are a major problem for baby boomers who are leaving their lifelong careers and yet won’t get their old age pensions yet.