Dream is over for Moon, but still has role to play

Dream is over for Moon, but still has role to play 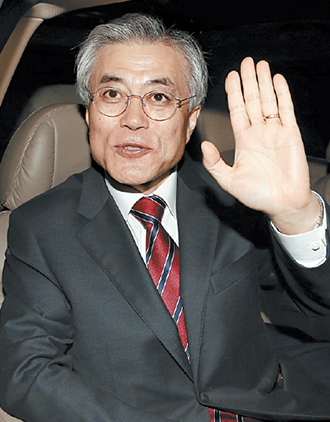 Defeated Democratic United Party presidential candidate Moon Jae-in said he will give up his “personal dreams” in his final speech as a candidate.

Moon yesterday attended a ceremony held at the party’s headquarters in Seoul to disband his camp and made his last speech as the party’s candidate.

“My personal dreams, in which I would create new politics and the new world on my own, ended,” Moon told party members.

“But I want you to play a role in monitoring any arrogance or self-righteousness of the next administration and achieve a victory with a better candidate for the third democratic administration [led by liberals].

“Although I gave up the dream, I will always add my strength to any efforts to foster the political areas of liberals along with the DUP and civic groups.”

On Wednesday at around 11:45 p.m., when most of the ballots were counted nationwide, Moon visited the DUP’s headquarters and convened a press meeting to concede the race.

“I did my best, but that was not enough,” Moon said. “I admit my defeat. But it’s a failure of mine, not a failure of the people who desire new politics.”

Moon congratulated his rival for her victory. “I send my congratulatory message to candidate Park Geun-hye,” he said. “I expect her to show that politics are a win-win and consolidation of the people.”

Despite his defeat, Moon said the main opposition party earned the largest number of votes ever.

“The 14.6 million votes - they were the most support we have ever received,” Moon said yesterday. “From that point of view, I think we had a big success.”

Eyes were on whether Moon would step down as lawmaker after the defeat.

Moon, who holds a geographic seat in Busan, has publicly said that he “won’t give up the seat only because he is running in the election,” and he “promised not to do that to voters.”

Moon is also currently the acting chairman of the DUP, appointed to it since former head Lee Hae-chan and other leadership members stepped down en masse, taking responsibility for the sluggish negotiations between Moon and then-independent candidate Ahn Cheol-soo over merging their campaigns.

However, Moon didn’t mention yesterday in his speech whether he will give up the temporary chairmanship or not.

Ahn, Moon’s former rival and also a supporter, arrived at San Francisco International Airport yesterday and faced reporters who were waiting for him there.

He rarely responded to their questions, but he discussed his future in politics. “I told you I will continue,” he said.

Ahn said he will stay in the United States for about one or two months and mull over his upcoming plans for his political career.