Park rounds up her supporters to construct inner circle

Park rounds up her supporters to construct inner circle 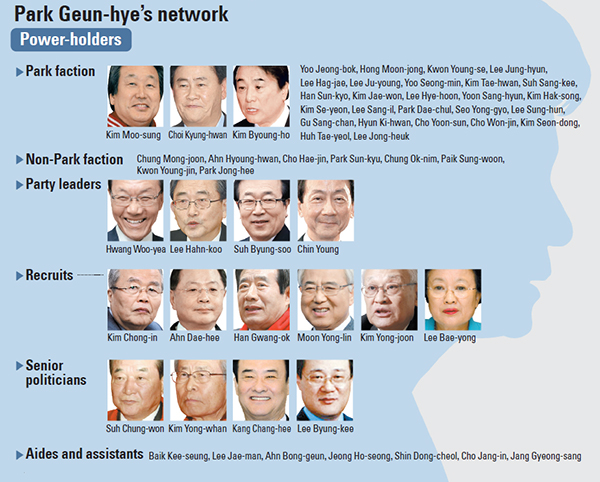 Two long-time aides of Park Geun-hye are always mentioned whenever the power elites surrounding the president-elect are discussed.

Representative Choi Kyung-hwan and former lawmaker Kim Moo-sung are at the center of Park’s inner circle.

When Park started her primary campaign to win the Saenuri Party nomination in July, Choi was the chief manager who started the planning.

But when the actual presidential campaign took off, demands grew from inside the ruling party that the campaign needed a complete overhaul.

Around October, Park’s rating slid quickly as she faced a series of sensitive issues concerning her father Park Chung Hee’s controversial legacy and her perception of it. Internal discord among her strategists also flared.

Choi, then, stepped down from his post as chief campaigner, asking the public to hold him responsible for everything. After Choi resigned, Kim stepped in to stop Park’s campaign from melting down.

The 61-year-old former lawmaker from Busan supported Park for a long time.

He oversaw her campaign during the presidential primary in 2007, which Park lost to President Lee Myung-bak. 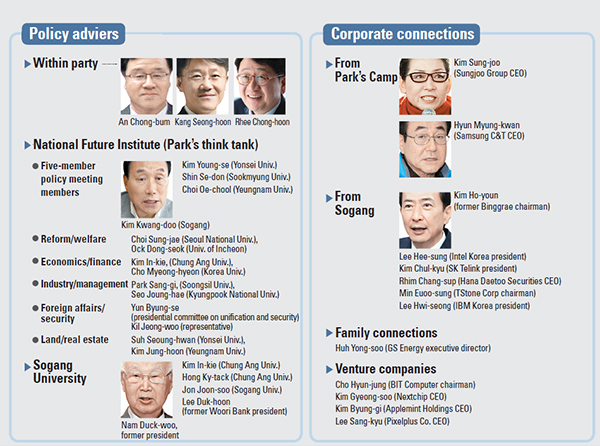 Although the Kim-Park relationship withered when Kim challenged Park’s decision in 2009 to support the relocation of the majority of government offices to Sejong City, they quickly restored their tie after Kim accepted the decision of the party, under Park’s leadership, to deny him a nomination in last April’s general election.

He stayed with the party and supported the other candidates, helping to prevent an exodus of disgruntled politicians who, like him, were denied nominations.

As the “control tower,” Kim slept on a cot in an office of the party’s headquarters and oversaw Park’s campaign around the clock.

Kim Chong-in, the architect of Park’s economic democratization vision, and Ahn Dae-hee, former veteran prosecutor who led Park’s political reform agendas, were the strategists whom Park recruited from outside the party to boost her campaign.

Park also recruited Han Gwang-ok, who served as the presidential chief of staff in the Kim Dae-jung Blue House, to promote her “grand national unity” campaign.

She also maintained relationships with experts for her policy-making. Representatives An Chong-bum and Kang Seog-hoon of the Saenuri Party polished Park’s policies and messages before she made her pledges public.

After Park made announcements, they provided detailed explanations about her policies to the press on behalf of her.

Kim Kwang-doo, honorary professor of Sogang University, is also known as the key economic policy brain in the Park campaign.

Kim is a representative member of the group along with former prime minister Nam Duck-woo and professors Kim In-kie and Hong Ky-tack of ChungAng University.

In comparison to President Lee Myung-bak, known for his long, successful experience as a CEO, Park’s ties with the business community are relatively weak.