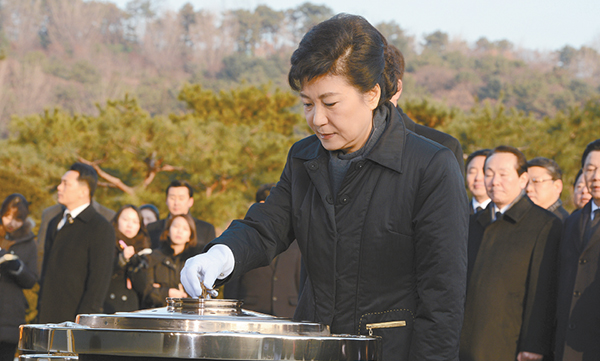 
President-elect Park Geun-hye said yesterday her first goal was to bring to an end the deeply rooted regional, ideological and generational schisms of Korea.

“I will listen to various opinions of people, whether they supported me or not,” Park said at a press conference yesterday morning at the party’s headquarters just hours after celebrating her victory on the streets of Seoul. “I will strive to end the chain of history of extreme divisions and conflicts over the past half century with reconciliatory efforts and impartial personnel appointments.”

Park also promised to open her office to the people regardless of hometown, gender or age.

“It is my dream to build a 100 percent Korea,” she said, “and make every single one of the people happy by maximizing the hidden talents of this country.”

In her speech, Park spoke highly of her defeated liberal rival Moon Jae-in. “I believe Moon and I both shared the same idea to serve this country and the people,” Park said. “When I run this country, I will always remember that idea.”

“Park first called Moon and told him, ‘Let’s make efforts to do the politics of win-win and cooperation for the people,’” said Cho Yoon-sun, a Saenuri Party spokeswoman.

After a neck-and-neck race, Park’s victory was confirmed when the ballot counting was completed at 5 a.m. yesterday.

Park’s victory set many records. Not only is she Korea’s first woman president, she is the first presidential candidate to win more than 50 percent of the vote since direct elections were restored in 1987. She also got votes from more people than any other candidate since the election of 1987.

She is the first president to have majored in engineering and the first unmarried president.

She is also the first child of a former state leader to ascend to the presidency; Korea hasn’t had the political dynasties common in other Asian political systems. Throughout the campaign, the controversial legacy of her father, late strongman Park Chung Hee, served as a double-edged sword. But Park eventually won with strong backing from conservative, elderly voters who came of age during her father’s dictatorial rule, which laid the foundation for Korea’s industrialization. 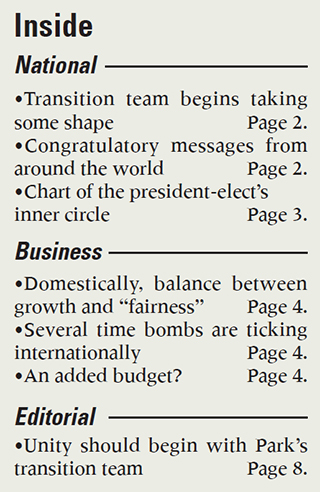 At her press conference yesterday, Park once again used the slogan of her father’s Saemaeul Movement, “Let’s live better.” She said she will repeat the miraculous growth of the country.

“I will make sure the fruits of economic growth will be shared,” Park said. “I believe that is the true national unity, economic democratization and the people’s happiness. As the first woman president, I will accomplish new changes and reforms.”

Before addressing the press, Park began her first day as president-elect by visiting the National Cemetery in Dongjak District, southern Seoul.

She presented flowers, burned incense and offered a silent tribute before the Memorial Tower, which enshrines memorial tablets and remains of soldiers who died during the Korean War.

She then visited the graves of the former presidents interred at the cemetery including that of her father and Kim Dae-jung, the anti-dictatorship dissident most feared by her father’s regime.

In the guest book of the cemetery, Park wrote, “I will open a new era of change and reform” and signed her name with the title president-elect.

Throughout her campaign, Park highlighted her vision for “grand national unity” by ending the country’s long-time divisions. Her narrow victory against the liberal Moon demonstrated that the nation was still evenly split between conservatives, who were the force behind Korea’s industrialization and who are centered in certain northern provinces, and liberals, the force behind the move to democracy, who are centered in southern regions.

The breakdown of the voting also demonstrated the perennial regionalism of Korean politics. Park won in all major cities and provinces around the country except for Seoul, Gwangju and South and North Jeolla.

While she suffered a narrow defeat in Seoul by scoring 47.8 percent against Moon’s 51.8 percent, Jeolla voters made clear their opposition to her and everything she and her party stand for. In Gwangju, she only scored 7.8 percent of the vote, South Jeolla 10 percent and North Jeolla 13.2 percent.

In contrast, Park scored over 80 percent in her longtime strongholds of North Gyeongsang and Daegu.

“The victory by a narrow margin of votes shows that overcoming the national division is her most urgent challenge,” said Park Won-ho, professor of political science at Seoul National University.

He compared the situation to the 2002 election in which liberal Roh Moo-hyun won a narrow victory against conservative Lee Hoi-chang.

“The situation, however, is a little better compared to 10 years ago because the ruling and opposition parties have a shared consensus on economic democratization and larger welfare programs, while they remain apart on North Korea policy,” Park Won-ho said. “It is therefore possible for the two sides to try to agree on some specific policies,” he said.