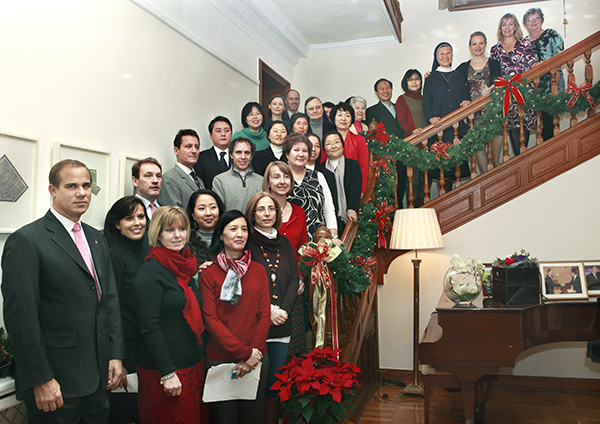 Donators and recipients gather together for the Mince Pie Morning charity event hosted by the British Association of Seoul hosted at the residence of the United Kingdom’s ambassador to Seoul, Scott Wightman, on Dec. 11, ahead of Christmas season. By Park Sang-moon


About a hundred guests of the British Embassy gathered at the residence of British Ambassador Scott Wightman in central Seoul for the Mince Pie Morning charity event on Dec. 11. They were greeted by the lilting Christmas carols of the Seoul Foreign British School senior choir and slices of fresh-baked pie.

The guests included both representatives from organizations and businesses that raised funds through activities sponsored by the British Association of Seoul and local charities that were recipients of donations.

Afterward, Anne Wightman, the ambassador’s wife and honorary patron of the association, presented a total of 100 million won ($93,000) in donations to 11 charities.

The causes included groups supporting the elderly, abused children, North Korean refugees, the homeless and those suffering from HIV/AIDS.

“Our organization is voluntary and a way in which the foreign community here can give back to society,” said Ruth Attewell, an organizer of the event from the British Association of Seoul, which dates to the 1970s.

“Mince pie is a very traditional holiday pasty served in all British families during the holidays. It can be served with brandy butter, served warm. It’s filled with sweetmeat, not actually minced meat as many people commonly think, with currents and spices,” said Helen Brightman, president of the British Association of Seoul, explaining the significance of mince pie at Christmastime. She added that the event was a day when everybody could gather and look back on a year of good work in support of worthy causes.Sister Gerardine Ryan from St. Colomban’s Home in Mokpo, South Jeolla, which runs a day-care program for disabled adults, expressed her gratitude. “The donations will make possible many things for the shelter, such as improvements to the cafeteria and other facilities,” she said.