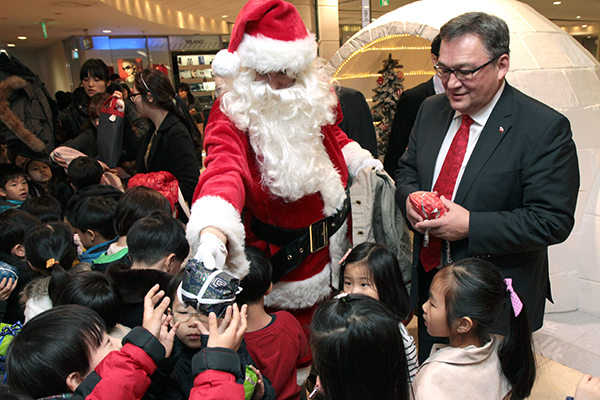 Greenland Premier Kuupik Vandersee Kleist hands out gifts to local children at the Shinsegae Department store in Gangnam District, southern Seoul, on Dec. 13, for a Christmas event hosted by the Denmark Embassy. Kleist arrived on Dec. 12 as part of a five-day trip to Korea. Provided by the Embassy


“Santa, where is your home?” a 7-year-old asked at a department store in southern Seoul that had been transformed into a Winter Wonderland.

Santa had a very special helper on Dec. 13 at the Gangnam Shinsegae Department Store - the premier of Greenland, Kuupik Vandersee Kleist, who made a five-day visit to Korea last week to reciprocate a visit by President Lee Myung-bak to the world’s largest island in September.

In between meetings with Korean Foreign Minister Kim Sung-hwan and President Lee Myung-bak, the premier stopped by the ninth floor of the department store to attend the Denmark Embassy’s ongoing Christmas calendar event.

The embassy hopes to introduce the tradition of counting down to Christmas with an advent calendar. The event is in its second year after a successful run in 2011 at Shinsegae’s Myeongdong branch.

Earlier that day, Kleist spoke to the Korea JoongAng Daily about his visit.

“I met with Minister of Foreign Affairs Kim Sung-hwan and discussed issues regarding trade and the opportunity for Greenland’s businesses to enter the Korean market,” Kleist said.

“Greenland is building its foreign relations,” said Kleist, adding that he sees increased exchange as mutually beneficial for the two countries.

Greenland, an autonomous country within the Kingdom of Denmark, is rich in natural resources. President Lee and Kleist agreed to work closely to further cooperation between the two countries, encouraging the sustainable development of resources in Greenland, combatting global climate change and opening up shipping routes.

The Danish Santa Claus and the premier passed out Denmark-brand toys to the eager children from Banpo-xi Kindergarten.

“Though most of the kids are learning for the first time about where Denmark and Finland are, we showed a map,” said Park Sung-won, the students’ English teacher. “And the kids were excited about meeting the Greenland premier. I think today will be a wonderful memory for the kids to enjoy Christmas and recall Denmark for years to come.”