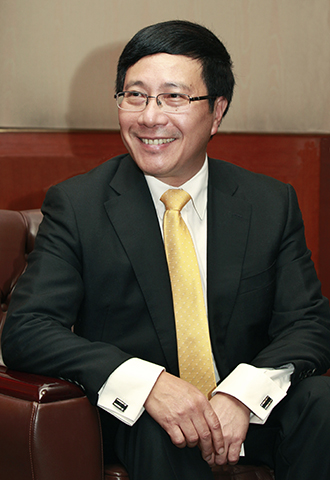 The Vietnamese foreign minister said he hopes for a free trade agreement between Korea and Vietnam that will nearly double the two countries’ trade in a recent interview.

The foreign minister of Vietnam, Pham Binh Minh, met with the Korea JoongAng Daily at the Grand Hilton Hotel in Hongeun-dong, northern Seoul, in the middle of Vietnam Week in Korea 2012, which included a dinner celebrating the 20th anniversary of diplomatic relations between the two countries attended by Prime Minister Kim Hwang-sik.

Pham made a four-day visit to Korea from Dec. 6 upon the invitation of his Korean counterpart, Foreign Minister Kim Sung-hwan, to partake in Vietnam Week’s art exhibition, business forums and cultural exchanges. He also met with President Lee Myung-bak and other Korean ministers.

When President Lee visited Vietnam in 2010, the bilateral relations of the two Asian countries were upgraded to a “strategic and cooperative partnership.”

“The Republic of Korea is at present the second largest investor in Vietnam with more than 3,000 investment projects with registered capital of $25 billion, that is around 30 times higher than in 1992,” the minister said. “Korean investors have been in most of important economic centers of Vietnam, including Hanoi, Ho Chi Minh City, Hai Phong, Da Nang and in all the realms of production and services.”

Affirming that cooperation with Korea is a top priority in Vietnam’s external relations, he added that Korea is now the fourth-largest trading partner of Vietnam.

Vietnam and Korea launched negotiations for a bilateral free trade agreement in August. The first round of talks in September in Seoul “reflected the two sides’ determination to accelerate the process,” Pham said.

“The bilateral FTA, once concluded and implemented, will bring a great impetus to economic cooperation, especially investment and trade relations between the two countries,” Pham said. “With the attractiveness of both countries’ huge markets, given the two sides’ practical requirements and mutual benefits, the Vietnam-Korea FTA will be concluded at an early date.”

An FTA will help the two countries’ fulfill the objective of boosting bilateral trade to $30 billion, the Vietnamese foreign ministry said, and narrow existing trade imbalances.

The two countries are striving, the foreign minister said, to achieve the target of $20 billion in the near future. In 1992, trade was only $500 million.

The minister talked about the high number of Vietnamese people in Korea. “The number of Korean-Vietnamese bicultural families is now over 50,000,” he said. “The Vietnamese people have a saying that bowls and cups in the cupboard sometime clash, so discord in multiethnic families is possible due to the differences in culture, lifestyle and thinking among family members.” He added that he has spoken with Foreign Minister Kim about measures to reduce the divorce rate among Korean-Vietnamese couples.

Korea sent a trade delegation of over 100 companies to Hanoi in July in an effort to balance trade with Vietnam.

“With a more open policy regarding visas and imports and exports, the number of Vietnamese tourists visiting Korea will increase and Vietnam-Korea bilateral trade will also expand, hence Korean consumers will have more opportunities to access Vietnamese products,” said Pham.