No. of indebted households rises

No. of indebted households rises 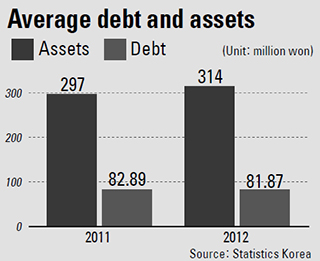 Despite a slowdown in the growth of aggregate household debt due to a slight increase in disposable income, the number of indebted households rose, a government report said yesterday.

According to Statistics Korea, the average amount of household debt stood at 81.87 million won ($76,197) as of March this year, down 1.2 percent on-year.

However, indebted households accounted for 64.6 percent of the country, up from 1.8 percent points from a year earlier, according to the data.

“The figures mean that the number of households with smaller amounts of debt increased this year,” said Chung Koo-hyun at the statistics agency.

Including those with no debt, the country’s average household debt stood at 52.91 million won, up 1.7 percent from 2011. The growth rate fell significantly, compared to a 12.7 percent growth from the period between 2010 and 2011.

The annual report on household finances has been published for the third time since 2010 amid growing concern over the risk underlying the high level of household debt in the country.

Total household debt reached a record 937.5 trillion won as of end-September, tantamount to more than 70 percent of the gross domestic product for last year.

The growth pace of household debt has lately slowed down after the government and regulators introduced various policy measures aimed to curb the rise. The focus of such measures was mainly aimed at debt restructuring through banks for those with a high risk of default.

However, it showed 68.1 percent of households consider the repayment of principal “a burden,” with nearly 26 percent saying it’s “an extreme burden.”

Of the assets, 75.1 percent were embedded in real estate, with 24.9 percent made up of financial holdings such as bank deposits, stocks and bonds.

As of end-March, the ratio of households’ principal repayment to their disposable income came in at 17.0 percent, down from 18.3 percent in the tallied period, the report showed.