The election’s over so prices will rise

The election’s over so prices will rise 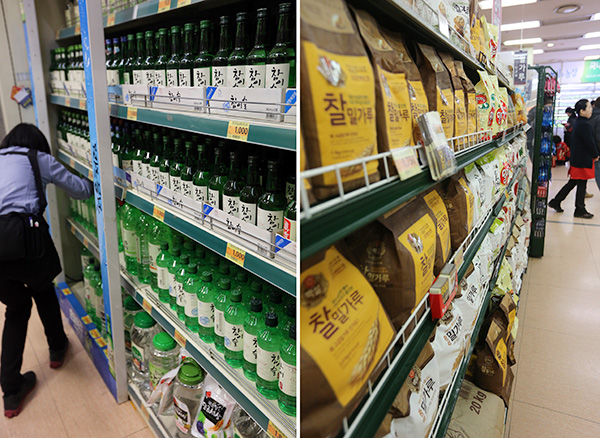 Bottles of soju, left, and bags of flour, right, at a large discount store yesterday. Shortly after the Wednesday presidential election, prices of a number of food products, including processed foods and fresh products such as tofu and bean sprouts, jumped as food companies decided to raise them at a time when they will encounter less political pressure. [YONHAP]


With the presidential election finished, major food producers yesterday started raising their prices as had been widely predicted.

Retailers say fresh food prices are rising sharply while price hikes for processed foods like tofu and flour are on the way.

“Our policy is to jack up prices of the food products from today,” said a spokesman at CJ CheilJedang. “But as it requires negotiation with retailers, the date could slightly be delayed.”

Pulmuone, which makes perishable foods such as tofu and soybean sprouts, is discussing a price hike of 7 to 10 percent with retailers.

Even the price of soju is rising.

Hite-Jinro said yesterday it will raise the factory price of its soju by 8.19 percent for the first time in four years starting from tomorrow.

“Considering the price of raw wheat currently in stock and international grain prices, the price hike is inevitable,” said a spokesman at DongA One. “Nevertheless, we minimized the hike rate for price stability.”

Market analysts said food companies see the time after the presidential election as the only opportunity to raise prices because they will get less pressure from the current government.

Under the Lee Myung-bak administration, food companies have been pressured not to raise prices as price stabilization was a key government goal.

But with the rising prices of raw materials, a rise is overdue.

The government said yesterday it will tighten control on companies that increase their produce prices by unfairly high rates.

“Even though there are numerous factors that push prices up, like rises in international grain prices, we ask private companies to absorb the increases and refrain from raising prices,” Joo Hyung-hwan, deputy minister at the Ministry of Strategy and Finance, said at a meeting in Sejong City yesterday.

Joo emphasized the government will enhance monitoring on prices for livelihoods of the working class.

The Korea Gas Corporation (Kogas) asked the Ministry of Knowledge Economy yesterday for approval to raise the wholesale price of gas from January. If the ministry grants approval, ordinary consumers will have to pay higher bills.

Kogas increased the wholesale price by 4.9 percent in June.

The Ministry of Land, Transport and Maritime Affairs also announced yesterday that bills for water in provincial cities will rise 13.8 won per ton from Jan. 1. Households will see an average 141 won increase in their water bills.

Tolls for private-funded highways will also rise by 100 to 400 won. The toll for the Incheon International Airport Expressway will be hiked to 8,000 won from the current 7,700 won from Thursday.

In Busan, Daejeon and Ulsan, the flag fall in taxis will go up by 16 to 19 percent next year.