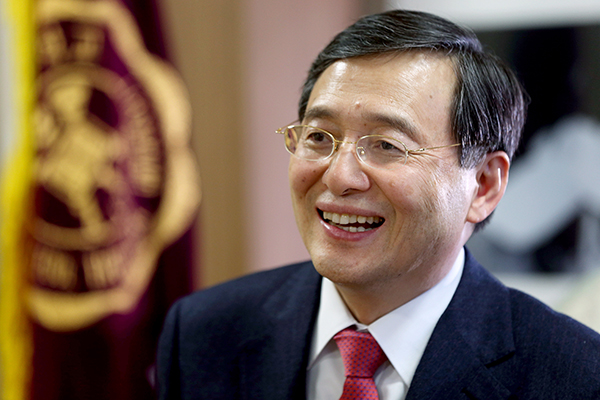 
“Is the study of humanities in crisis? It might be as a major, but liberal arts classes are enjoying unprecedented popularity. In every class, the 3,000-seat auditorium is so tightly packed that some of the students sit in the aisle to attend lectures,” said Yu Suk-sung, president of Seoul Theological University.

The 61-year-old spoke with excitement. Yu has been in charge of the humanities program at STU since the second semester of 2010, and the department has introduced a number of new features.

“Some people come a long way from the provinces by train to take the class,” Yu said. “The lectures were also recorded and uploaded on the school Web site [www.stu.ac.kr]. They are getting a lot of hits.”

The JoongAng Ilbo met with President Yu and asked why he began preaching the study of humanities.

Q. Why do you think studying the humanities is so important?

A. It’s the basis of all studies. We can easily see that by looking at the core subjects - literature, history and philosophy.

Literature increases creative imagination while history improves the ability to make correct judgments, while philosophy helps us to think rationally. Regardless of what you are majoring in, the basis of any subject is the study of humanities.

Even natural scientists will not be able to produce a concept easily, should they not improve their creative imagination through literature. For leaders, liberal arts and knowledge of the humanities are particularly essential requirements.

Traditionally in the East, leaders fostered their leadership characteristics such as self-discipline through the study of humanities.

It seems peculiar that a school devoted to theology emphasizes the humanities.

The spirit of Christianity is love, justice and peace. If you think of the concept of peace vaguely, you might just think of it as a state of silence. However, by studying the humanities, you can specify it by saying, “Peace is the state where social justice has been realized.”

Peace is the state where political democratization and economic equality are accomplished without alienation or discrimination.

Also, in order for a pastor to give a good speech, the study of humanities is necessary.

Could you describe some of the successes of the new program?

In the short term, it contributed to the development of the school. As the lectures have continued for three years, the awareness of the school has increased and admission is becoming more competitive every year.

I expect STU will grow into an internationally prestigious university.