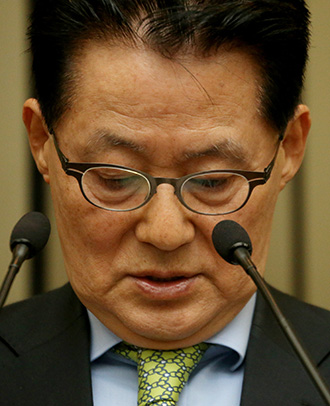 Park Jie-won, floor leader of the main opposition Democratic United Party, stepped down yesterday to take responsibility for the defeat in the presidential election.

The DUP’s lawmakers convened a closed-door meeting yesterday to do a post-mortem on why they were defeated in the election even with the kind of high voter turnout that should have favored them.

“Starting from today, I resign from the position of the floor leader of the party,” Park said at the meeting. “Someone should take responsibility, and I think the 127 DUP lawmakers should all feel responsibility.

“I think we should basically move forward with thorough reflection and reform,” he said. “If we don’t go forward in this way, I believe the existence of the DUP will be endangered.”

Park said he told the DUP’s presidential candidate Moon Jae-in about his decision. “I met with the candidate yesterday,” Park said. “I told him I will step down starting from today.”

Park, a former chief presidential secretary to late President Kim Dae-jung and an icon of South Jeolla politics, is regarded as one of the old, inner-circle members of the DUP. He became floor leader in April, right after the main opposition party was unexpectedly defeated by the ruling Saenuri Party in the legislative elections.

At the time, Lee Hae-chan, a core member of the so-called “Roh Moo-hyun’s loyalists,” a leading faction in the party, became the chairman of the DUP.

But some party members are denouncing Lee and Park, old icons of the liberals, for dominating the party and wanting Moon to be the candidate.

“We had troubles in unifying all party members because of the faction of Roh royalists and the hegemony of Lee and Park,” a DUP member told the JoongAng Ilbo. “Moon himself is a great person, but trying to make him president was the ambition of the Roh faction.”

Lee Yong-sup, another high-profile DUP lawmaker and a close aide to Park, said at a press meeting yesterday that he will step down from his position as the party’s policy-making chairperson. Most of the party’s leadership resigned in November in the middle of stormy and ultimately unsuccessful negotiations to forge an electoral alliance with independent presidential candidate Ahn Cheol-soo. Park had to remain to work on the national budget.

Now, all of the DUP’s leadership has stepped down and the party will soon launch an interim leadership. Moon, who is currently the acting chairman, will appoint the interim leader. Liberal politicians are calling for changes in the main opposition party. Moon, who attended a ceremony yesterday to disband a campaign group composed of civic activists, said too much had been expected of the DUP.

“I deeply felt that it’s really difficult to bring about a new kind of politics and shift power to the opposition through the power of the DUP alone,” he said in a speech.

Park Sang-chul, a former member of the DUP’s reform committee and a liberal commentator, said that the defeat of the DUP was not only about the party, but a judgment of all liberals in the country.

“We need to reform all the liberals,” Park said in an interview with the Pyeonghwa Broadcasting Corporation yesterday. “The core members of the DUP have shown a lot of problems, such as insisting on winning the negotiations for the electoral alliance [with Ahn]. An opposition party the people desire is one that can embrace moderate people.”