Ahn Cheol-soo goes on hiatus in U.S. after vote

Ahn Cheol-soo goes on hiatus in U.S. after vote 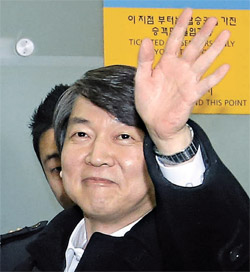 Former presidential candidate Ahn Cheol-soo arrived in San Francisco on Wednesday, saying he will spend time thinking about his next political step after his once conservative rival was elected South Korea's first female president.

Shortly after casting his ballot in Seoul for Wednesday's vote, Ahn left South Korea along with his family, leaving a congratulatory message for the president-elect without knowing the result of the tight race. (Yonhap)