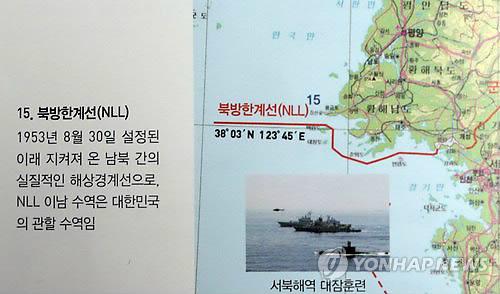 South Korea included a detailed description of the western sea border with North Korea for the first time in its defense "white paper" report released Friday, stating that the line has been the de facto maritime boundary for 60 years.

It has long been an established fact that the Northern Limit Line (NLL) has served as the inter-Korean border in the Yellow Sea since the end of the 1950-53 Korean War. But the description's addition is seen as underlining Seoul's commitment to guarding the boundary disputed by Pyongyang.

"It is the de facto maritime boundary between South and North Korea since it was drawn on Aug. 30, 1953. The waters below the NLL are controlled by the Republic of Korea," the defense report said, referring to South Korea by its official name.

Past editions mentioned the NLL without explanation.

Pyongyang does not recognize the line and demands it be drawn farther south. The dispute has made the western waters near the border a flash point and has led to a series of deadly naval clashes between the two Koreas near the sea border.

The maritime boundary issue resurfaced ahead of the presidential election, as leading candidates tried to highlight their capability to lead the country that still confronts the hostile neighbor as the next commander-in-chief.

Lim Kwan-bin, the deputy defense minister for policy, said the latest edition was aimed at raising public awareness of the border issue through official documents.

"As the defense white paper represents (the government's) official position, the definition was included to help people clearly recognize the NLL," Lee said in a briefing.

The paper also made clear Seoul's sovereignty over the islets of Dokdo, which Japan has also claimed as its own. 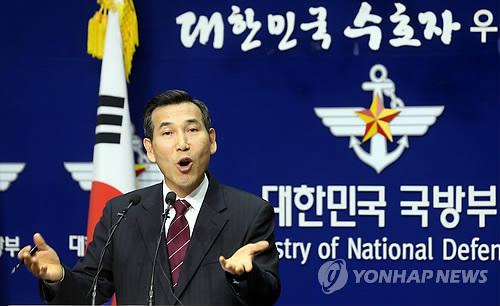 "Dokdo is an apparent territory of the Republic of Korea geographically, historically and under international law," the paper noted next to a photo of the island.

The government added two photos to the latest edition in addition to a map including the islets in South Korea's territory.

"Our military has a strong willingness to defend Dokdo and has prepared a deterrence posture," according to the paper.

South Korea has kept a small police detachment on Dokdo since 1954.

Relations between Seoul and Tokyo have sunk to one of the worst levels since President Lee Myung-bak made a visit to the islets in August, the first by a South Korean leader. Japan strongly protested the move and renewed its claims to the East Sea islets.

Seoul has flatly rebuffed Japan's demand for taking the matter to the international court for settlement, saying its makes no sense to refer a dispute over what is clearly the country's territory to the court.

Seoul's latest assessment of the North Korean military, defined as South Korea's "enemy," showed that its total troop levels remained unchanged at about 1.19 million and the number of artillery pieces and main weapon systems were at a similar level as previous years.

The 2012 paper is the first since Kim Jong-un took the helm of the communist state in a third-generation power transition after his father Kim Jong-il died about a year ago.

"Since 2011, North Korea has presented a two-track strategy by raising hostile rhetoric while using manipulative rapprochement tactics at the same time," the paper said, noting the North's warnings of attacks over South Korea-U.S. military drills and civic groups' attempt to send anti-Pyongyang leaflets across the border.

The North has long denounced the joint military exercises between the allies, claiming they amount to a prelude to war. Seoul and Washington have countered that the drills are defensive in nature.

While the paper detailed the North's failed rocket attempt in April, it did not mention its Dec. 12 launch because it was released after weeks of postponement due apparently to concern over its possible political and diplomatic implication ahead of the Dec. 19 presidential vote.

The latest edition said the North has honed its missile technology through several tests since the late 1990s, which is capable of targeting its Asian neighbors as well as the U.S. territory of Guam with its mid-range missiles.

The paper also said Pyongyang's "highly enriched uranium (HEU) program" has been under way and the country is "evaluated to have secured about 40 kilograms" of weapons-grade plutonium by reprocessing spent nuclear fuel rods four times.

North Korean officials at the facility told him that 2,000 centrifuges were operational and producing low enriched uranium for fuel for the experimental light water reactor that was under construction. The uranium enrichment program could give the North a second route to build a nuclear bomb.

Regarding the latest development of the North's nuclear program, a senior intelligence official said satellite images have lately spotted activities around what are believed to HEU facilities.

"According to satellite images jointly analyzed by South Korea and the U.S., such (nuclear) activities are spotted around (HEU) facilities," the senior official said, without elaborating. "Although we have not yet concluded (about the possibility of a nuclear test), we are currently keeping track of the signs."

Following the North's latest rocket launch, South Korea's defense minister Kim Kwan-jin also said that Pyongyang is preparing for another nuclear test so it can be ready when the time is right to hone its intercontinental ballistic missile technology following its attempts in 2006 and 2009.

The two Koreas are still technically at war because the 1950-53 Korean War ended in a truce, not a peace treaty. About 28,500 U.S. troops are stationed in the South, a legacy of the war.

Relations between the divided Koreas deteriorated after the conservative Lee administration cut off the no-strings-attached-aid for the impoverished North and demanded an apology for the deadly provocations in 2010.