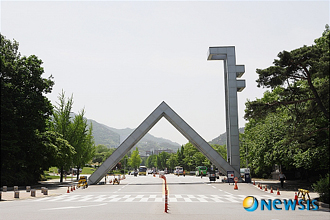 The number of foreign professors at Seoul National University has tripled over the past five years in accordance with the school’s effort to boost competitiveness by hiring more international teaching staff, school officials said yesterday.

According to data from the school, the number of teachers from overseas, including part-time instructors, came to 233 as of April, accounting for about 15 percent of the total.

Full-time professors took up the largest share of 39.5 percent, with the number of visiting professors accounting for 26.6 percent and part-time instructors 15.8 percent, the data showed.

“The school has been trying to consistently hire world-renowned foreign teachers to strengthen the school’s global competitiveness,” said an SNU official. “Last year, we vowed to increase the number of international professors to 30 percent of the total teachers as a way of developing the quality of education.”

Thomas Sargent, an economics professor at New York University and Nobel Prize laureate, began teaching at the university in September, and mathematician Efim Isaakovich Zelmanov from Russia will serve as an SNU professor for two years starting in 2014, the school said. Yonhap