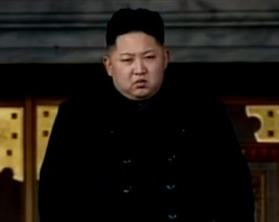 North Korean leader Kim Jong-un has called for more satellites and rockets to be launched following the country's apparent success in sending a satellite into orbit earlier this month, the communist nation's state media said Saturday.
Kim made the remarks Friday at a banquet honoring the scientists, technicians and others who contributed to the Dec. 12 launching of a long-range rocket that put the satellite Kwangmyongsong 3-2 into orbit, the North's Korean Central News Agency (KCNA) said in an English-language dispatch monitored in Seoul.
Seoul, Washington and other nations have condemned the lift-off as a violation of United Nations resolutions that ban the communist country from testing ballistic missile technology.
North Korea claims that the launch was for peaceful purposes and to put a scientific satellite into space.
In a speech at the banquet, the leader in his late 20s said the country should develop and launch more satellites, including communications satellites, and carrier rockets with bigger capacity "with the same spirit and stamina with which you successfully launched satellite Kwangmyongsong 3-2," according to the KCNA dispatch.
"The successful launch of the satellite, an aggregate of latest science and technology, is a great event specially recorded in the 5 000-year-long history of the Korean nation which was provided by the wise leadership of Kim Jong-il and the Workers' Party of Korea's policy of attaching importance to science and technology and a great auspicious event of all people, a product of the painstaking efforts and heroic struggle of you present here," he said.
Kim Jong-il is the leader's father who died last year after ruling the country for 17 years.