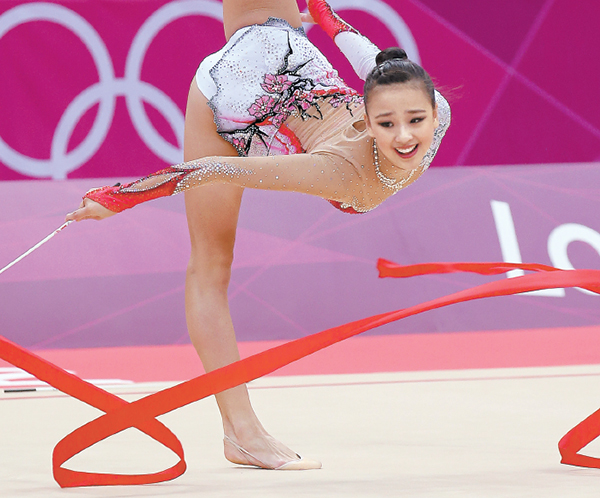 Son Yeon-jae performs in the rhythmic gymnastics final at the London Olympics on Aug. 11. The 18-year-old finished fifth, the best Olympic performance ever by a Korean rhythmic gymnast. [Joint Press Corps]

In the poll by Gallup Korea from Nov. 15 to Dec. 6 of 1,700 people, Son, a star of the London Olympics, received 37.2 percent of votes to beat out a pack of contenders dominated by fellow Olympians.

Respondents were allowed to select up to two athletes, according to Gallup Korea. The annual survey on top athletes began in 2005.

The 18-year-old finished fifth at the London Olympics, the best Olympic performance by a Korean rhythmic gymnast. She could have reached the podium had she not dropped her clubs during her final program.

The close call further endeared Son to Koreans, who embraced her as the darling of the South Korean delegation in London and the country’s most popular girl next door.

Park Tae-hwan, an Olympic swimming star, took second place with 29.1 percent. He grabbed two silver medals in London, overcoming a judging controversy over a disqualification ruling in a preliminary heat of the 400-meter freestyle.

Park Ji-sung, midfielder for the Queens Park Rangers of the English Premier League, ranked third with 23.7 percent. He was voted the top Korean athlete in 2011, but he has been battling injuries in 2012.

Figure skater Kim Yu-na was fourth at 23 percent. She returned to competition earlier this month in Germany, ending a 20-month hiatus, and promptly established the best score by a female figure skater this season en route to a resounding victory. Kim ranked first on the Gallup surveys in 2007, 2008 and 2009.

Gymnast Yang Hak-seon, the London Olympic champion in men’s vault, rounded out the top five with 16.3 percent. He is the first Korean to win an Olympic gymnastics gold.

In sixth was another Olympian, footballer Ki Sung-yueng. The Swansea City midfielder in the Premier League was an instrumental player on Korea’s bronze medal-winning team in London. It was the country’s first Olympic football medal.

Four current and retired baseball players claimed the next four spots in the top 10.

Choo Shin-soo, who was recently traded from the Cleveland Indians to the Cincinnati Reds, was seventh, followed by pitcher Ryu Hyun-jin, who recently signed with the Los Angeles Dodgers.

Park Chan-ho, who retired from baseball in November, ranked ninth, and Lee Dae-ho, the slugging first baseman for the Orix Buffaloes in Japan’s Nippon Professional Baseball, came in at 10th.

Since Gallup Korea began this poll, this was the first year that no baseball player was among the top five. Yonhap