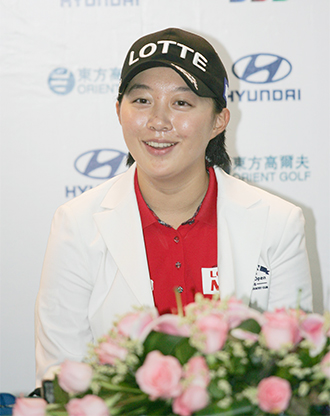 Super rookie Kim Hyo-joo’s bursting onto the women’s golf scene was the biggest topic among local golf fans this year, grabbing more attention than exhilarating performances on the PGA Tour by Rory McIlroy and Tiger Woods, according to a recent J Golf survey.

Kim, a high school junior who turned professional in October, won the Hyundai China Ladies Open on Dec. 16, hauling in her first professional victory faster than any other KLPGA golfer. The victory came two months and 11 days after the 17-year-old turned professional, six days earlier than it took Kim Mi-hyun, an eight-time LPGA winner.

Kim Hyo-joo was sensational early on, winning the Lotte Mart Ladies Open on Jeju Island in April, becoming the first amateur in two years to win a KLPGA title. Two months later, she triumphed at the Suntory Ladies Open in Japan, the youngest winner in the history of the event.

In September, Kim set another record in Taiwan by winning the Swinging Skirts Open, becoming the first teenager ever to win tournaments in Korea, Japan and Taiwan.

The steady golfer also grabbed attention on the LPGA circuit with a fourth-place, 14-under par finish in the Evian Masters in July.

That performance brought her a 500 million won ($465,000) sponsorship deal with Lotte Group in October. It was a record amount for a rookie, 200 million more than the initial sponsorship deal for World Golf Hall of Famer Pak Se-ri.

World No. 1 McIlroy garnered four fewer votes, or 20 percent, as the Northern Irishman capped a record-breaking season on both sides of the Atlantic and was the leading money winner on the PGA and European tours.

The comeback of Woods, who had suffered a fall from grace due to a sex scandal in 2009 and his subsequent divorce, ranked third in the survey. The former world No. 1 returned to his winning ways, starting with a victory at the Arnold Palmer Invitational in March, his first tournament win in 30 months.

He went on to win the Memorial Tournament and the AT&T National. He recorded a top-10 finish in nine events en route to finishing second in the money ranking with $6.13 million. His world ranking also improved to third.

The fourth-biggest topic was the impressive performance of Korean women on the LPGA. Asians swept the four majors of the world’s most lucrative tour this year, and Koreans won three of them.

The fifth topic was a missed one-foot putt by Kim In-kyung, 24, at the Kraft Nabisco Championship, one of the LPGA’s four majors, to hand the title to her compatriot, Yoo Sun-young.