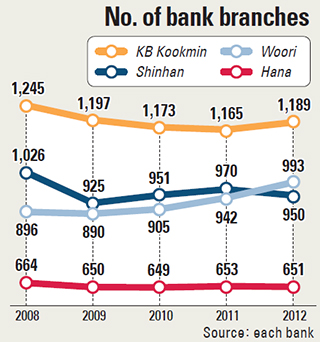 Suh Yong-im, 53, needed to make a deposit but had nowhere to go. The bank branch near her house in Bongcheon, southern Seoul, was shut down.

“I was surprised when they closed the branch,” Suh said. “It seems that banks have also been affected by the economic slowdown.”

It’s not unusual for banks to open new branches in a moment’s notice in flourishing neighborhoods while closing those in dwindling parts of town. But the recent changes in the economy - especially the struggling real estate market - are changing map dramatically.

While Gangnam remains a major competitive battleground for banks, Sejong City, where numerous government offices are relocating to, and Haeundae in Busan are rising as the new popular destinations for branches. In contrast, Yongsan, once a hotbed, has been losing steam.

Over the last two years, the four major banks - KB Kookmin, Shinhan, Woori and Hana - have opened branches in 137 locations while either entirely closing or merging other branches in 56.

Gangnam District still remains a banking hotspot, although real estate values have fallen. In this neighborhood, six new branches were opened, which is the largest number in a single district throughout the country.

“Gangnam, where the rich are all clustered, will be the strategic area for some time,” said Kim Seong-yeop, an official of Hana Bank. “The stagnant real estate market might be an opportunity.”

High-rolling investors in Gangnam are diverting their investments to financial products. This trend also drove banks to aggressively open branches at Haeundae, a posh neighborhood in Busan.

Woori has two branches there while Hana and KB Kookmin each have a branch in Marine City, the high-end apartment complex in Busan.

In another apparent trend in the industry, banks are now targeting industrial complexes. Pangyo of Gyeonggi is rising as the next target as startup firms are booming around the so-called “Techno Valley.”

Among the 72 branches that were opened this year throughout the country, 30 percent were at industrial complexes. This is a stark contrast to the past decade, when banks were busy opening up branches in residential areas or in districts preparing for housing development.

“Banks weren’t too eager to set up branches at industrial complexes as profitability is not as high [as in housing developments],” said Kim Seok-kun, a KB Kookmin Bank official.

“However, the recent establishment of branches at industrial complexes shows that banks are competing in search of companies with high profitability.”

Kim said that there are rumors that the places to take notice of next year are the Gasan Digital Complex in southwestern Seoul and the Incheon Industrial Complex.

“It is said that big money rolls in every time a company succeeds in attracting investments and that the companies that are opening up within the complexes are rising, which will translate to more clients,” Kim said.

Sejong City is grabbing attention by the banks as well as numerous government departments, including the Prime Minister’s Office as well as the Ministry of Strategy and Finance and the Ministry of Knowledge Economy, are already relocating to the new administrative city.