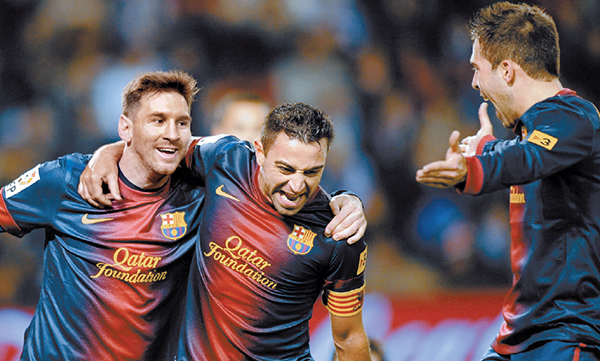 FC Barcelona’s Lionel Messi from Argentina, left, Xavier Hernandez, center, and Jordi Alba, right, celebrate after scoring during a Spanish La Liga match against Real Valladolid at the Jose Zorrilla stadium in Valladolid, Spain, on Saturday. Messi polished off his record year with his 91st and final goal of 2012 in Barcelona’s 3-1 win. [AP/YONHAP]


BARCELONA, Spain - Lionel Messi polished off his record year with his 91st and final goal of 2012 in Barcelona’s 3-1 win at Valladolid on Saturday night, while Jose Mourinho’s decision to bench goalkeeper Iker Casillas backfired as Real Madrid lost 3-2 at Malaga and fell 16 points off the pace in the Spanish league.

Messi fed Jordi Alba, who crossed to Xavi Hernandez for the first goal in the 43rd minute, dribbled between a defender’s legs to score in the 59th.

Expected to win his fourth FIFA Player of the Year award next month, Messi finished 2012 with 79 goals for Barcelona: 59 in the Spanish league, 13 in the Champions League, five in the Copa del Rey and two in the Spanish Super Cup. He had 12 for Argentina: five in World Cup qualifiers and seven in exhibition games.

Players from both teams wore T-shirts with messages of support for Barcelona coach Vilanova, who had throat surgery Thursday for the second time in two years to remove a second tumor from a saliva gland.

Barcelona (16-0-1) holds a nine-point lead over second-place Atletico Madrid (13-3-1) and dropped defending champion Real Madrid (10-4-3) to its biggest deficit in more than a decade.

“The difference with the leader is insurmountable,” said Mourinho.

Barcelona was coached by assistant Jordi Roura. Vilanova was released from a hospital just moments before the game and is expected to undergo about six weeks of chemotherapy and radiation.

“This win is for Tito,” Barcelona defender Dani Alves said. “It’s a surprise and joy that he is home now. We are here to help him any way he can. Football is secondary now, he is fighting for his life.”

At Malaga, Mourinho made the startling decision to bench Casillas, voted best goalkeeper in the world by players in each of the last four seasons, and start Adan Garrido. Madrid’s captain, Casillas had started 53 of Real’s last 54 league games, all but the finale last season after the title had been clinched.

“We hadn’t been playing well in different aspects of the game, including defense,” Mourinho said. “My opinion is the one that matters. I analyzed the players I had available and picked the team to play. You can invent the story you want, but it is a purely technical decision and nothing more.”

In England, Gareth Barry scored in the third minute of second-half stoppage time, giving second-place Manchester City a 1-0 win over last-place Reading in the Premier League.

Arsenal (8-4-6) won its third straight league game, moving into third place with a 1-0 victory at Wigan on Mikel Arteta’s 60th-minute penalty kick. The Gunners are ahead of Everton, Tottenham and West Bromwich Albion on goal difference.

Everton rallied for a 2-1 win at West Ham on goals by Victor Anichebe and Steven Pienaar after Carlton Cole put the hosts ahead. Cole and Everton’s Darron Gibson both received red cards.

Tottenham, missing injured American midfielder Clint Dempsey, was held to a 0-0 tie by Stoke. West Brom came from behind to defeat Norwich 2-1 on goals by Zoltan Gera and Romelu Lukaku after Robert Snodgrass had put the visitors ahead. Seventh-place Chelsea can return to third with a victory over Aston Villa on Sunday.

In the relegation fight, Queens Park Rangers is five points behind Wigan but a point ahead of Reading after losing 1-0 at Newcastle, which got a goal from Shola Ameobi in the 81st. That ended Harry Redknapp’s unbeaten start as QPR manager. AP