Even James Bond can’t save Sony

Even James Bond can’t save Sony 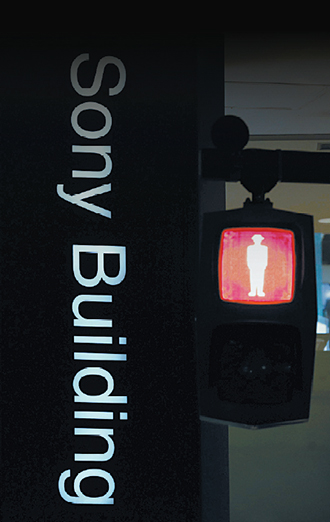 A traffic sign is seen in front of Sony’s logo at its showroom in Tokyo in this Nov. 22 file photograph. As it battles for Christmas shoppers’ wallets in the year-end holiday season, Panasonic is also seeking buyers for some of those properties to trim its fixed costs and improve cash flow at a time of intense competition. [REUTERS/YONHAP]

In “Skyfall,” actor Daniel Craig’s 007 uses Sony’s Xperia T smartphone, while Andrew Garfield’s title character in “The Amazing Spider-Man” wields an Xperia X10 Mini Pro. The two movies, released by Sony this year, have grossed more than $1.7 billion combined, compared with the company’s $10 billion in total losses during the past four fiscal years.

“It doesn’t look like a big product that can change the landscape for the Japanese electronics makers is arriving anytime soon,” said Masahiro Ono, an analyst at Morgan Stanley MUFG Securities in Tokyo. “Their tasks will remain the same as this year: cutting costs and promoting reform.”

Once symbols of Japan’s global dominance in consumer electronics, Sony, Panasonic and Sharp were among the nation’s worst-performing companies in 2012. Overtaken in market share by overseas rivals including Samsung Electronics, the trio lost $15 billion in combined market capitalization this year amid declining sales and a strong yen.

A comeback in 2013 may depend on whether the Japanese companies can take strong measures including shedding some businesses, said Kota Ezawa, an analyst at Citigroup in Tokyo. Sony, Sharp and Panasonic are eliminating more than 29,000 jobs, closing plants and selling assets to restore profit after failing to come up with hit products to challenge Apple’s and Samsung’s mobile devices.

“Sony and Panasonic still have the chance to keep their pride,” Ezawa said. “They may have a sense of urgency that they need to change, but their business strategies aren’t showing that.”

Sony, which invented the Walkman music player in 1979 and introduced the first CD player, has posted four straight full-year net losses. The Tokyo-based company is headed for a ninth year of losses from televisions after losing market share to Samsung, the world’s largest maker of TVs and smartphones.

At Sony, Chief Executive Officer Kazuo Hirai is counting on boosting sales of Xperia phones and turning around the TV-making unit. In April, he identified mobile devices as a key priority.

Sony, which sold 8.8 million smartphones in the quarter ended Sept. 30, is speeding up development of new models and working to integrate its technology from other areas into the mobile-phone business, said Yu Tominaga, a spokesman. He declined to discuss new products planned in 2013. The company maintained its full-year target of 34 million in sales even while cutting estimates for compact cameras, PCs, TVs and handheld game players.

“Everyone agrees that smartphones are an important business for Sony next year,” Citigroup’s Ezawa said. “It’s hard to tell whether the company can deliver a product that will surprise anyone.”

“The iPhone and Galaxy’s dominance probably won’t change, and there may be a limit to what Sony can do,” Morgan Stanley MUFG’s Ono said.

“It’s hard to believe the smartphone business will contribute much to Sony’s profit.”

“Sony is losing money at its mobile-phone unit, and that may make it difficult to cut prices,” Ezawa said.

Unlike Sony, Panasonic is shrinking its phone business.

Japan’s electronics giants will have to consider closing their TV-making operations by the end of 2014, Ono said.

“It’s too late for them to try to catch up with Samsung,” he said.