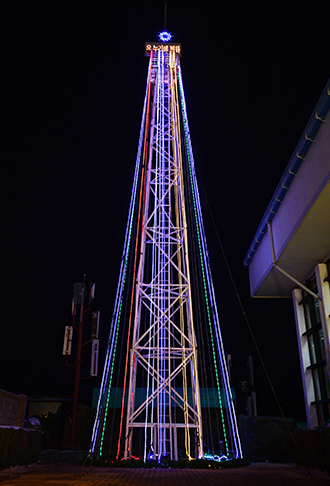 A giant Christmas tree at Aegibong in northern Gyeonggi just south of the inter-Korean border is lit on Saturday. [NEWSIS]

A giant structure intended to represent a Christmas tree in Gimpo, Gyeonggi, near the western section of the inter-Korean border, has been lit up despite strong opposition from local residents worried about retaliation from North Korea.

At 6:20 p.m. on Saturday, members of Yeongdeungpo Church and a federation of Korean churches for saving North Korea defectors lit up a giant Christmas tree at Aegibong, or Aegi Peak, in Gimpo, Gyeonggi. They sang hymns and carols such as “Silent Night” and “Joy to the World.”

On the 30-meter (98-foot) tower, which is in the shape of a Christmas tree, about 30,000 LED bulbs in various colors were lit, and a sign which reads “peace all over the world” was placed at the top of the tower. The lights will stay on until Jan. 2.

“Recently, North Korea once again began its military provocation by launching a long-range rocket,” said Pastor Kim Choong-lip of the Korean church federation that led the lighting ceremony. “We judged that we must send peace messages to people in the North.”

Residents in Gimpo strongly opposed the event. Dozens of residents who have been opposed to distributing leaflets across the border and the Christmas tree blocked access with two tractors and also blocked buses carrying members of the church.

The Ministry of National Defense had said earlier that there wouldn’t be a ceremony to light the tree this year as a civic group that submitted its plan to host the ceremony canceled its plans.

But on Thursday, a day after the presidential election, the Defense Ministry changed its stance.

“We decided to allow the ritual as Yeongdeungpo Church applied for the event on Dec. 7,” said Kim Min-seok, spokesman of the Defense Ministry.

The ceremony must be authorized by the Defense Ministry after a religious group submits its application.

On Saturday afternoon, the North warned that “we can take military action if they [the South] light up the tower at Aegi Peak.”

The Defense Ministry said it has obtained intelligence that the North’s leader Kim Jong-un ordered an attack on the giant Christmas tree and have prepared for any potential military provocations.