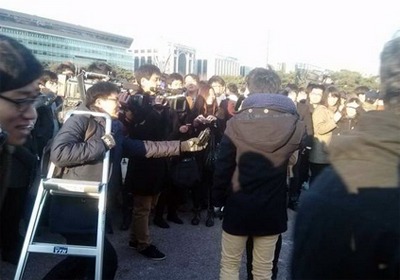 His idea was to have an event on Christmas Eve where single men line up on one side of Yeouido Park and have single women line up on the other. Then he would have someone blow a whistle and have the two sides run at each other.

On the event’s Facebook page and Naver post, about 43,000 people have clicked the box saying they will attend in 15 cities around the country, including Seoul, Daegu, Busan, Daejeon and Gwangju. The Yeouido event is scheduled to begin at 3 p.m.

But not everyone sees it as such a happy-go-lucky occasion. The Christmas Eve blind date event will be under close watch by area police.

The National Police Agency said yesterday it will dispatch a large number of officers to the 15 cities nationwide to prevent sexual assault and crimes targeting teenagers.

The NPA said it has read many messages online from predators intending to sexually harass timid females on Web portal sites since the event was announced by organizers, so it will dispatch patrol cars near the locations.

It said it will cooperate with civic groups and education authorities to keep teenagers in check.

All male participants are encouraged to wear white and females to wear red.

It said that the event isn’t commercially sponsored, but it said they will offer gifts to people if they start dating that day and post their pictures on the event’s Facebook page.

In mid-December, Yeouido Park management warned that it wouldn’t authorize the event as it was concerned about people’s safety.