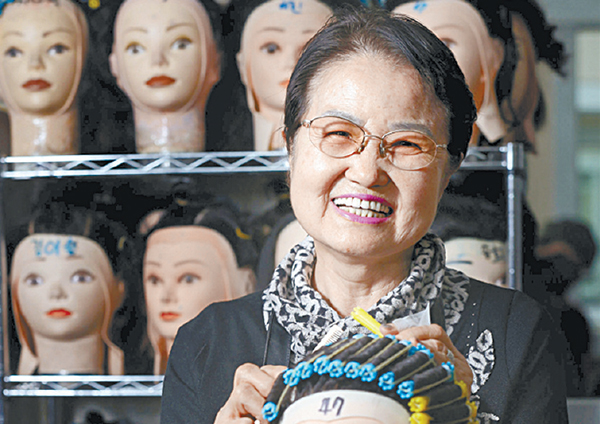 Seo Tae-suk, a 71-year-old housewife who achieved the hairstylist certificate last month to become the oldest salon professional in the country, poses for a photo at a beauty salon academy in Suwon, Gyeonggi, where she received her training. By Park Jong-keun


A 71-year-old woman named Seo Tae-suk lived as an average housewife for almost five decades until she decided to begin a new chapter in her life late last year.

Seo set a goal of becoming a hairstylist. She first enrolled in a beauty salon academy last April and soon found out she was the oldest student. Seo recalled the second-oldest person was in her 40s.

A determined Seo received training with students mostly in their 20s and 30s and it didn’t take long for her to realize passing a test for a hairstylist certificate was a formidable task given her age and physical fitness.

After failing the test three times, Seo poured her energy even more into learning beauty treatment skills and finally passed her fourth test to become a professional hairdresser last month, becoming the oldest person to earn a certificate in the beauty business.

“I was really happy that I proved to others I was able to achieve something despite my age,” Seo told the JoongAng Ilbo. “I am thinking about opening a hair salon near my house to give haircuts to older people for free.”

Seo is one of the increased numbers of seniors who have achieved their belated technical qualification certificates in recent years.

According to the Human Resources Development Service of Korea, those over the age of 65 who won technical certificates more than doubled last year to 569 from 260 in 2007.

Among the 569 new technicians this year, the 77-year-old Lee Eun-sil, who achieved a master craftsman confectionary making certificate is the most senior.

“I plan to open a cafe after I pass the barista certificate test with my former students,” said the former middle school teacher.

The rise in the number of cases among the elderly people is attributed to an increased average life expectancy and elevated education level among Koreans.

“Demands for fulfilling self-esteem through re-employment have increased [among the elderly],” said Park Jae-hyun, senior researcher at the human resources institute.

But even for elderly men and women with technical certificates, another challenge of finding jobs awaits them. Yun Du-seop, 75, who has his firefighting equipment certification, failed to get a job that could make use of his skills due to his age.