Visitors come to Korea to see how democracy works

Visitors come to Korea to see how democracy works 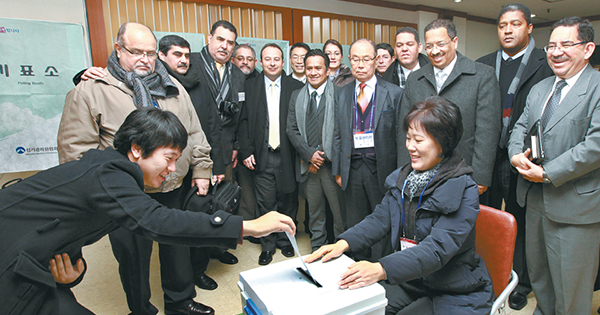 Officials from Dominican Republic and El Salvador watch an absentee voter cast a ballot on Dec. 13 at a polling station in Songpa District Office, southern Seoul. The 13 officials, including the president of the Central Electoral Board of the Dominican Republic, took part in a 12-day program from Dec. 9 to Thursday, to learn about the electoral system in Korea. By Park Sang-moon


On the morning of Dec. 13, a group of 13 officials from the Dominican Republic and El Salvador watched curiously as a long line of people waited to cast their absentee ballots at Songpa District Office, southern Seoul, for the presidential election on Wednesday in which Park Geun-hye won office.

“It should take a considerable time for all these men and women in line to cast votes, right?” asked one of the officials.

What happened next took all the visitors by surprise.

The 54-yard queue shrunk rapidly as people had their ID cards and registrations checked and went into vote.

“I can see the whole process of voting here is very efficient with multiple voting booths installed,” said Roberto Marquez, president of the Central Electoral Board of the Dominican Republic.

“What’s more surprising and impressive,” he said, “is that it takes such a short time to identify each voter’s registration.”

Marquez and 12 other high-ranking officials from the two Latin American nations, including four judges from the Salvadoran Electoral Supreme Court, were invited by the Korean Civic Education Institute for Democracy to get a first-hand look at Korea’s political and electoral systems on a 12-day visit.

During their trip to the absentee voting station, the officials kept busy by taking pictures of voters and examining the voting booths. Their interest was particularly taken by young police officers in line to vote.

“Many military and police officials in El Salvador have difficulty voting on Election Day as they are in charge of overseeing voting that day,” said Eugenio Martinez, president of El Salvador’s electoral office.

“Only the lucky public officials dispatched to work at voting sites near their registered residencies hope to be able to vote.”

Martinez told the Korea JoongAng Daily it was noteworthy that many police officers, who are doing their mandatory military service, and public officials, all of whom will work on election day to oversee voting, are thoroughly guaranteed of their voting rights through the absentee ballot system.

“Since the El Salvador government is now considering introducing absentee voting,” Martinez said, “this program will be helpful in our efforts to come up with better representation systems.”

“Many nations with young democracies take great interest in our experience in democracy and electoral history,” said Professor Jung Young-sik of the Korean Civic Education Institute for Democracy, who oversaw the program.

“They look at what we went through because they think we have accomplished a high level of democratization and economic development,” the professor said.

Many nations are interested in political progress since 1987, when Korea returned to democracy after decades of authoritarian rule.

“Southeast Asian countries especially show great interest in the program,” Jung said. “And at this time, ahead of the presidential election, it was the perfect chance to see how the electoral system works so these 13 officials flew halfway around the world.”

There was a lot of press covering the event as well because it was the first of two days of absentee voting, which took place Dec. 13 and 14, in which 898.864 Koreans cast ballots out of 973.525 registered absentee voters, a 92.3 percent turnout.

The 13 visitors attracted attention from the press and ended up posing for pictures behind voters dropping ballots into a ballot box.

Marquez of the Dominican Election Board expressed his surprise at the large number of people coming to vote as early as 9:30 a.m., saying, “Such a high enthusiasm to participate in an election is something many nations should embrace.”

After their visit to an absentee voting station, the 13 officials visited the headquarters of both the ruling Saenuri and the major opposition Democratic United parties to see how major parties run their election campaigns.

The officials held a meeting with officials of the two parties and visited the press centers at the headquarters.

“Many aspects of the campaign are similar between Korea and El Salvador,” said Mari Sutter, an IT adviser at the election board in the most densely populated country in Central America. “We also have a press briefing room at party headquarters. One difference I have found is the size of media groups at each camp and high-tech IT devices used here for news coverage.”

During their meeting with officials of the two parties, some sharp questions were asked.

“I understand the support gap between the two major nominees Park Geun-hye and Moon Jae-in [as of Dec. 13] is really narrow,” asked Eduardo Bermudez, magistrate of the Salvadorian Electoral Supreme Court, during his meeting with DUP campaign managers at the party headquarters in Yeongdeungpo, western Seoul.

“Swing voters are estimated to be 10 percent,” he continued. “Does the DUP know the ages and gender of the critical swing group? And what is the party’s strategy to attract these swing voters critical to win the election?”

“I wish I knew the answer to that question,” Yun Ho-jung, secretary general of the DUP, said with a laugh.