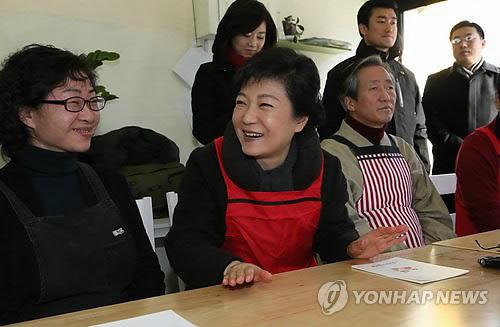 The ruling Saenuri Party said Monday that it will take measures to legitimize the country's vast underground economy and adjust the country's tax codes to generate more state revenue to meet the expected rise in welfare spending under the new Park Geun-hye administration.

Park, who won last week's presidential race and will be sworn into office on Feb. 25, has called for various measures to bolster state revenue during her campaign trail.

The 60-year-old president-elect called for ending various tax breaks, bringing to light the estimated 300 trillion won (US$279 billion) underground economy so more taxes can be collected, as well as measures that can indirectly raise the tax burden for rich individuals and large businesses.

Reflecting this, the National Assembly's finance committee agreed over the weekend to mark up the minimum tax rate from the current 14 percent to 16 percent for big companies with an average tax base in excess of 100 billion won.

In addition, the minimum tax rate for high income earners such as lawyers and doctors may be raised from the current 35 percent to 50 percent, although this plan has not been passed by lawmakers and is under consideration.

The Saenuri Party, moreover, said it will take steps to levy higher taxes on people with large financial assets by adjusting the consolidated taxation rates for such holdings. At present, the consolidated taxation rate for financial holdings begins if a person earns more than 40 million won per year from holdings. The ruling camp hinted that it wants to push this down to 30 million won.

The party added that it will also expand taxation of capital gains on stock transfers.

On dealing with the underground economy, Saenuri said that it will revise the country's Financial Intelligence Unit (FIU) law so as to allow the National Tax Service greater access to official data.

Party floor leader Lee Hahn-koo said that changing FIU rules can make it possible for the tax office to ferret out various forms of tax evasion and help generate around 6 trillion won in extra earnings for state coffers.

Deputy floor leaders of the ruling party and main opposition Democratic United Party (DUP), meanwhile, agreed earlier in the day to pass the 2013 government budget by Friday at the latest.

Initially, Saenuri and the DUP agreed to pass the bill on Nov. 22, during the last regular session of the National Assembly, but this was delayed as lawmakers failed to compromise on spending cuts. Seoul has asked lawmakers to approve a 342.5 trillion won spending plan for the new year that represents a 5.3 percent or 17.1 trillion won increase from this year.